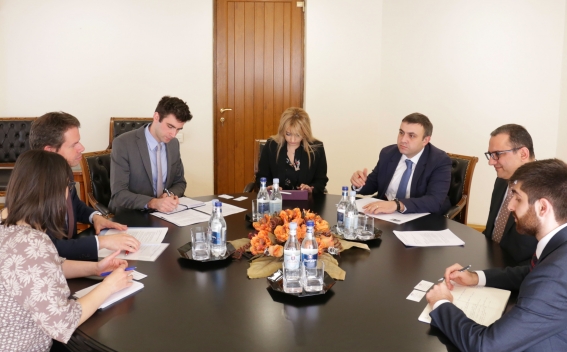 The ambassador noted that since 2018, France has been paying special attention to post-revolutionary Armenia, praising its consistent fight against corruption. As a result, according to the ambassador, a number of French companies are interested in the prospect of operating in Armenia. "They don't come to Armenia for other subjective reasons," Lacote said. "They come because there are real opportunities here." The ambassador also presented the work on implementation of major investment projects in Armenia, and outlined, together with the minister, the future plans.

Minister Khachatryan stressed that the success of these programs will further bridge the economies of the two countries. The ambassador, in his turn, assured that the big brands’ expected arrival in Armenia will also change the attitude of the French investment community towards the country.

The sides exchanged views on geographical indications, too. Tigran Khachatryan noted that Armenia is committed to fulfilling its respective obligations, and underlined the importance of establishing an institute of notes.

The parties also touched upon the companies with French capital operating in Armenia, and their future plans.