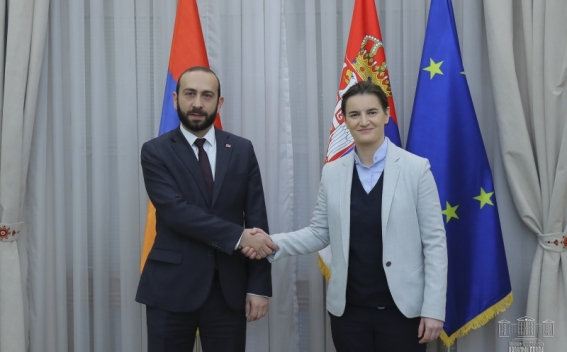 On March 10, within the framework of the official to Serbia on March 9-11 the delegation led by the RA NA Speaker Ararat Mirzoyan met with the Prime Minister of Serbia Ana Brnabić.

Welcoming the delegation led by the Head of the Parliament of Armenia the Prime Minister of Serbia thanked the Armenian MPs for the friendship and support by Armenia. Ana Brnabić was greatly interested in developing the relations between the two countries in the economic, educational and high technologies’ spheres. He noted that in the context of the development of bilateral relations the bilateral cancellation of visa regime and already the official opening of the Embassy of Serbia to Armenia in these days were important.

Thanking for warm reception Ararat Mirzoyan has underlined that the relations between the two countries and peoples are really friendly, and there is still unused great potential and joint efforts should be made for it. The Head of the parliament has opined that besides the cancellation of the visa regime it is necessary to undertake steps for establishing direct air link between the two countries, which would allow activating the contact between the two peoples.

Touching upon the position of the Armenian side on Nagorno Karabakh problem, the Speaker of the RA National Assembly has underscored that, first of all, it is ensuring the physical security of the Armenian residing there.

The parties, among other issues, also referred to the possible cooperation in the sphere of the military industry.

Later Ararat Mirzoyan had a meeting with the Head of the Serbian Orthodox Church Patriarch Irinej.