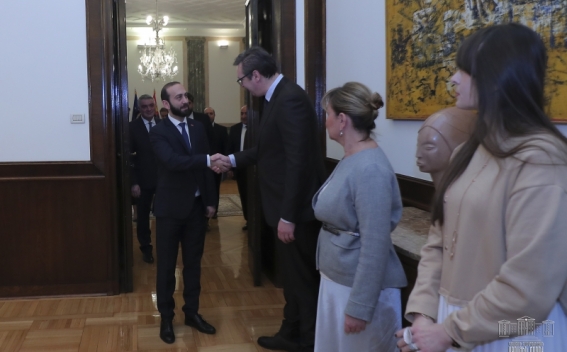 On March 11, within the framework of the official to Serbia the delegation led by the Speaker of the National Assembly Ararat Mirzoyan met with the President of Serbia Aleksandar Vučić.

The President of Serbia welcomed the delegation led by the Head of Armenia’s Parliament in Belgrade and expressed confidence that this visit would be a new impetus in the Armenian-Serbian relations.

Thanking the President of Serbia for the reception the Speaker of the RA National Assembly has noted that a number of high officials’ visits held in recent period shall assist the revelation and realization of the unused potential between the parties and has stressed deep historical and cultural ties exist between the two peoples. Ararat Mirzoyan underscored the fact of cancellation of visas between the two countries and expressed confidence that it would be a new impetus for touristic mutual visits.

The Head of the legislative body especially highlighted also the role of the two countries’ parliaments in the bilateral relations at the levels of Friendship Groups and Committees and international parliamentary formats.

The sides exchanged information on the situation existing in the two regions.

Regarding the Artsakh problem Ararat Mirzoyan has noted that the right to self-determination is the only guarantee of the physical security of the Armenian population living there. He has reaffirmed that the Armenian side sees the solution of the problem only through peaceful negotiations in the frameworks of the OSCE Minsk Group Co-Chairmanship and calls on his counterparts to back this format and the adopted principles.