Erdoğan in Talks with European Leaders Over Refugee Cash for Turkey 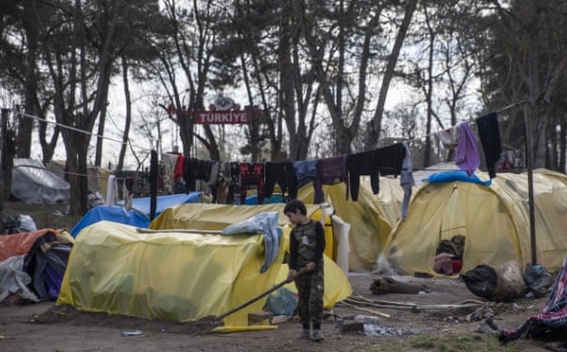 Turkey has pressed European leaders to make fresh cash pledges to prevent tens of thousands of refugees from leaving the country and trying to reach Europe amid a Russian-Syrian offensive in north-west Syria, The Guardian reports.

After intense bombardment in Idlib province last month, Turkey’s president, Recep Tayyip Erdoğan, encouraged thousands of refugees in the country to move on towards the Greek islands and the Baltics, in a repeat of the surge to Europe in 2015.

That push ended when the EU gave Turkey €6bn to house the refugees in Turkey. Nearly €4.7bn has been contractually awarded, but only about €3.2bn paid out.

In a phone call on Tuesday between the French president, Emmanuel Macron, the British prime minister, Boris Johnson, the German chancellor, Angela Merkel, and Erdoğan, the leaders discussed the possibility of a new refugee deal, ways to combat the continued Russian threat in Idlib, and the fear that coronavirus could sweep through the refugee camps bordering Syria in Turkey, Lebanon and Jordan.

The four leaders had originally planned to meet in person in Istanbul but because of the coronavirus outbreak settled for a 75-minute video call.

Erdoğan has been accused of blackmail by some Europeans for bussing refugees towards the EU’s borders. TV footage showed Greek security guards using water cannons and teargas against migrants who tried to force their way across the border.

Greece, supported by the EU, has suspended asylum applications for a month.

Johnson’s presence on the call marks a British reinsertion into the Syria crisis, after the UK was excluded from previous talks between Germany, France and Turkey.