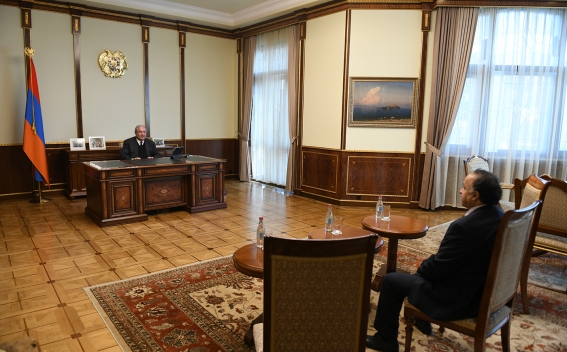 The President of Armenia referred to the agreements reached with Sheikh Mohammed bin Zayed Al Nahyan and noted that in the coming days the list of the necessary articles composed by the RA Ministry of Health would be handed to the UAE side.
At the meeting, discussed was also the development process of Armenia-UAE cooperation, stressed the importance of envigorating the collaboration in the area of food security and in the framework of the Presidential ATOM (Advanced Tomorrow).

After the meeting with the President of Armenia, Ambassador Mohamed Al Qatam Al Zaabi said that his country is ready to assist in the fight against the coronavirus.

“Coronavirus is a great challenge for peoples. We need to cooperate with all countries and this is not only about UAE or Armenia. We need to work together to contain this virus,” the Ambassador said and noted that a positive result could be achieved only by staying indoors and maintaining social distance. “It is critical to maintain social distance not only during official meetings but also with children and other members of the family.”

During the meeting with the President of the Republic, just as during President’s previous meetings, social distance was maintained.