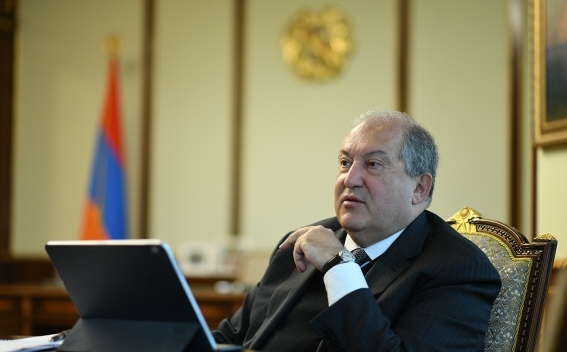 President Armen Sarkissian spoke through a video call with the Ambassador Extraordinary and Plenipotentiary of the Federal Republic of Germany to the Republic of Armenia, H. E. Mr. Michael Johannes Banzhaf.

The President of Armenia and Ambassador of Germany exchanged information on the situation in their respective countries related to the outbreak of the coronavirus, prevention of its spread and containment, measures and steps taken towards its treatment.

President Sarkissian sent also his best wishes to his good friend, Chancellor Angela Merkel, whom he knows for many years, since 1990s.

The parties discussed also possible joint steps in the fight against the global pandemic. Armen Sarkissian proposed to look into the opportunity of Germany’s assistance to Armenia, particularly in the form of protective devices, equipment, and articles. Hailing the German engineering experience and know-how, the President said that he expects, if possible, German companies’ counselling and offered to look into the possibility of establishing in Armenia a joint venture on the production of artificial lung ventilation devices.

The interlocutors referred also to the Presidential ATOM initiative and joint programs to be implemented in this framework. President Armen Sarkissian noted that he has held discussions on this topic with a number of German scientific and research establishments, major companies, particularly with Siemens. The project aims at the development of artificial intelligence in Armenia through the cooperation with international partners.