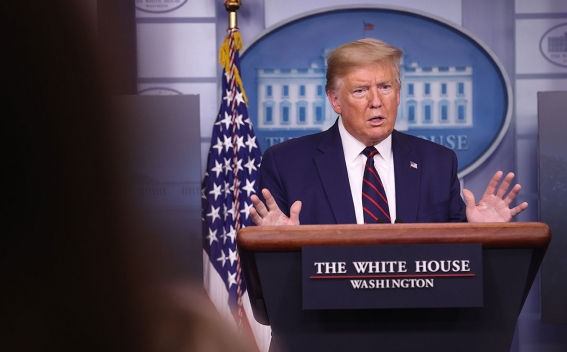 "This morning, the President was tested again for Covid-19, utilizing a new rapid point-of-care test capability. He is healthy and without symptoms," White House physician Sean Conley said in a memo distributed by press secretary Stephanie Grisham just before the daily White House coronatask force briefing.
The note, given to reporters moments before the President appeared for Thursday's coronavirus task force briefing, said Trump had the results 15 minutes after taking the test.
Trump said he took the new test, which provides results in 15 minutes, "really out of curiosity to see how quickly it worked, how fast it worked."
"I did take a test. It just came out, this is from the White House physician," Trump said at the briefing while holding up the memo.
"I just took it this morning. And I took it, it took me literally a minute to take it and it took me -- I guess it was 14 or 15 minutes (for results). I went to work, I didn't wait for it, but it said it took 14 minutes or something with a conclusion and it said the President tested negative for Covid-19."
News that the President has been tested twice -- he first tested negative for the virus in mid-March after coming into contact with two individuals who had tested positive -- underscores the unique challenge facing the White House as officials grapple with both how to contain the virus outbreak and take steps to avoid spreading it in the executive branch.
Հայերեն На русском