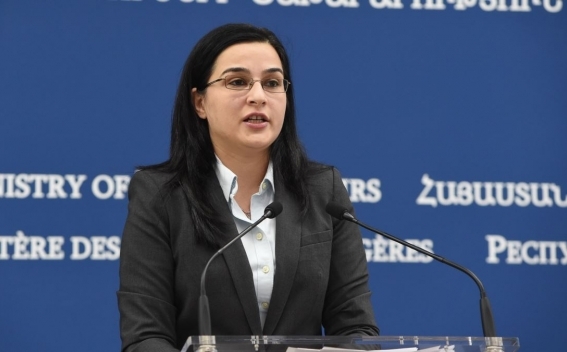 The systematic disseminiation of disinformation by the Azerbaijani authorities concerning the situation along the Armenian-Azerbaijani border, as well as on the line of contact between Artsakh and Azerbaijan is deplorable. It is aimed at covering up or justifying Azerbaijan’s own violations of the ceasefire and international humanitarian law.

Just to remind that on March 30, a minor of Voskevan village of Tavush region and two servicemen were wounded as a result of the ceasefire violation by the armed forces of Azerbaijan. It needs to be emphasized that during this military incident, the Azerbaijani armed units targeted the child within a civilian infrastructure, which is a clear violation of the international humanitarian law.

Obviously, Azerbaijan attempts to use the suspension of monitoring exercises by the Personal Representative of the OSCE Chairperson-in-Office, which is due the spread of COVID-19, in order to violate the ceasefire regime and disseminate disinformation.

We once again reiterate our commitment to respect the calls of the OSCE Minsk Group Co-Chairs and the United Nations Secretary-General to strictly observe the ceasefire and refrain from any provocative action during this period.

It should be noted that such developments particularly emphasize the importance of implementing the agreements on risk reduction and the establishment of effective international mechanisms to this end.