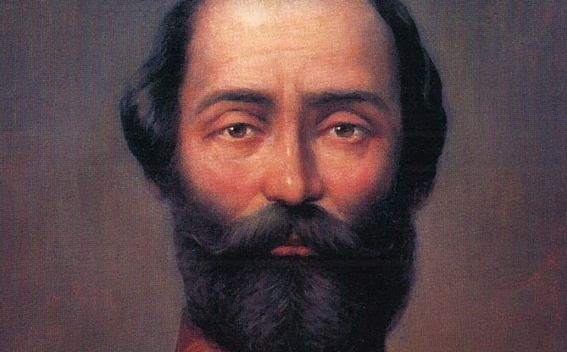 "As long as my descendants are alive, they must respect and keep Armenian books as family sanctity," said Hovhannes Czetzian, a prominent Hungarian freedom fighter of Armenian origin, a military commander during the Hungarian Revolution of 1848, and the organizer of Argentina's first National Military academy.

Hovhannes Tsetsyan, better known as János Czetz, was born in 1822 in Hungary in a family of Armenian immigrants.

Besides being a brave soldier and scientist, he was also a world traveler, whose adventurous life and stories could even be a compulsory reading for everyone. Czetz was known not only in Hungary but also in Argentina.  One of the streets in Budapest is now called after him and a statue stands in front of the Military Academy in Buenos Aires to honour his memory. Moreover, many Polish and Hungarian stamps were issued with the portrait of Czetz.

The military education of János Czetz begun after his father suddenly passed away. He continued his studies in Kézdivásárhely and Bécsújhely at the military academy, where the best soldiers of the monarchy were trained. During those years Czetz stood out for his exceptional abilities.

After the failure of the revolution, Czetz left for Germany, from where he moved to Paris. In 1851 he joined the revolutionary committee created in Paris. Disappointed with the policies of Napoleon III, Czetz moved to Spain, then to Portugal and then to Italy and with his Hungarian legion participated in the battle against the Austrians in Giuseppe Garibaldi's army.

Despite his military honors, Czetz lived a modest life. He worked as a translator and language teacher, he is also an author of many books. One of the most interesting books written by him - “Bem's Campaign in Transylvania in 1848-1849”- contains reliable information about the history of the Hungarian revolution.

Throughout his life, Czetz never forgot about Armenia. He kept correspondence with Armenologist-historian, ethnographer Khachik Songotyan and worked for his, “Armenia” magazine.

In 1861, Czetz settled with his family in Buenos Aires and began serving in the Argentine army. He later became the founder and first director of the Argentine Military Academy. Thanks to Czetz's organizational and pedagogical skills, as well as his joint efforts with the Argentine government in training military personnel, the Argentine army became one of the most modern armies in Latin America.

János Czetz died on September 6, 1904 at the age of 82. He is buried in the Recoleta Cemetery in Buenos Aires.