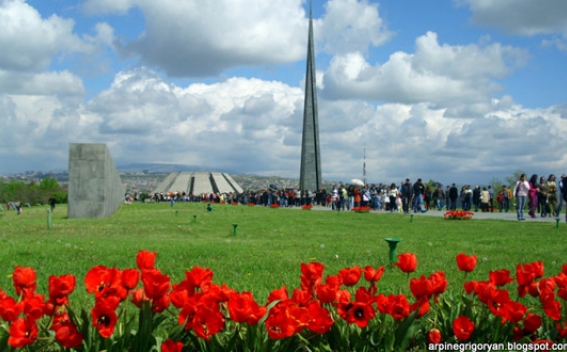 Under the Soviet rule, when it was prohibited and unacceptable to practice a national ideology, the commemoration of the Armenian Genocide and the inspiration of the victims’ memory were compelled to silence.

In 1965, the Soviet Armenian population demanded that a memorial monument be constructed, because Armenians in other countries had already commemorated the fiftieth anniversary of the Genocide. On April 24th, massive demonstrations were organized in the central squares of the Soviet Armenian cities as well as in Yerevan. Encouraged by public demand, on March 16, 1965 the Soviet-Armenian Government decided to build a monument eternalizing the memory of the victims of the Genocide. The efforts of people like Yakov Zaroubyan (First Secretary), who made every attempt possible to sway Moscow’s resistance, was made evident by the approval of the project.

In April 1965, a nation-wide competition was announced in Armenia to create the best and most representative memorial design. The announcement read as follows: The obelisk must embody the creative Armenian nation’s life that has been full of struggle, its inexhaustible vitality to survive, the progress it has made as well as representing its present and the bright future while eternalizing the memory of millions of victims of the Genocide of 1915.

69 participants (both diasporan and local architects) took part in the competition. They each submitted their projects under code names like ''Jayr'',''Pyunik'','' Moush'','' Ghoghandj'', ''Krak'', ''Karmir Tsaghik.'' The winning project’s codename was ''Armenia SSR droshak'' and architects were Arthur Tarkhanyan and Sashur Kalashyan were chosen as the successful bidders, genocide-museum.am reports.

It should be noted that it was not easy to build the monument in such a short period of time. According to the project, 12 large stones were to be placed, but it was impossible to cut and shape such stones. It was suggested to reduce the size of the stones or replace the stone with concrete. But the architects were against it and found another solution.

At that time Kalashyan found a job in Artik stone mine, and thus gave him the opportunity to cut large stones from the first row of the mine.

But during the construction of the memorial the architects faced also other difficulties, besides the time was too short. However, despite the hard work, a monument to the victims of the first Genocide of the 20th century was erected on Tsitsernakaberd Hill in 1967.

Before the construction of the memorial, the Armenian nation had been honoring the memory of the victims of the Armenian Genocide by visiting the Pantheon in the Komitas Garden.  From that day on, the memorial became a place of pilgrimage for all Armenians.

The construction and opening of such a monument in the capital of Soviet Armenia was an unprecedented event. What the Armenian people witnessed in Yerevan that day was touching and unforgettable. The mourning procession turned into a victorious march. Overcoming many difficulties, the Armenian people once again confirmed that they will fight until the victory of justice.

The complex occupies 4500 square meters of territory and consists of three main buildings: the Memorial Wall, the Sanctuary of Eternity (Memorial Hall & Eternal Flame) and the Memorial Column ''The Reborn Armenia.''

Before reaching the central part of the monument, visitors first observe a 100-meter long basalt Memorial Wall with the names of cities engraved in stone. The names also include the Armenian populations that were massacred by Turks during the Genocide campaign. Since 1996, the last portion of the Memorial Wall houses glass casings that contain soil taken from the tombs of political, and intellectual figures who raised their protest against the Genocide committed against the Armenians by the Turks.

At the center of the Monument stands the circular Memorial Sanctuary. Its unroofed walls consist of twelve, tall, inward-leaning basalt slabs forming a circle.  It’s said that  the 12 stone slabs symbolize the main 12 provinces in which the massacre took place.

In 1995, the Museum and Institute (architects S. Kalashyan, L. Mkrtchyan, A. Tarkhanyan, sculptor F. Arakelyan) was built near Tsisernakaberd to commemorate the 80th anniversary of the Armenian Genocide. Today, the Museum & Institute functions as a research center within the Armenian National Academy of Sciences.

The Genocide Museum’s mission is rooted in the understanding that the Armenian Genocide is important in preventing similar future tragedies, and in keeping with the notion that those who forget the past are condemned to repeat it.

Tsitsernakaberd has become the capital's visiting card since its construction. The monument erected on the hill has become a vivid evidence of the first genocide of the 20th century, which together with the museum calls on the generations not to forget about the Genocide and to fight for its recognition and condemnation.