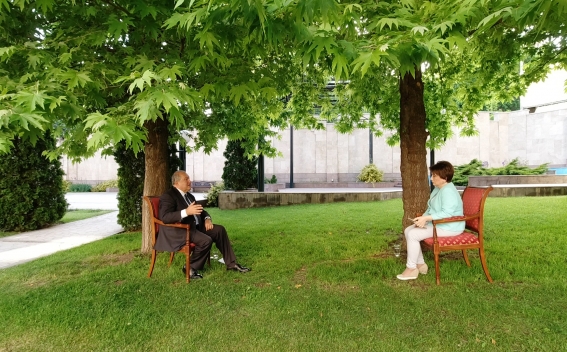 In an exclusive interview with the Erkri [email protected] program of the Yerkir Media TV station, President Armen Sarkissian spoke about the Lanzarote convention ratified by the National Assembly and his pertinent actions.

“This is a sensitive issue because it is related to children, their protection, education, and has certain nuances. The Convention is signed by 47 countries and ratified by 45, including Russia and European states. Our neighbors too, have ratified it. Azerbaijan ratified it with a statement containing three points which, I believe, will be in the center of our Foreign Ministry’s attention,” the President said. “First of all, it is a convention, not a law. As an individual, as president, I would like the convention to be a document which would give some idea, a guideline what our actions should be in the framework of the Convention, is there a concept?”

President Sarkissian noted that different countries, after signing the Convention, manifest different approaches. “There are countries which start education in the 7th grade, some start educating kids when they are four years old, other countries declared that they would apply it tentatively in five or ten schools. Other countries say that since the Convention stipulates that the educational part should be implemented with the parents’ consent, let’s give the educational part to the parents or implement it with their participation. It means that possibilities vary. I don’t know which way we will chose, and it concerns me.”

As for the legal part, any law, which is being submitted to the President, is to be signed by him in a 21-day period of time or sent to the Constitutional Court. “The Constitutional Court has already gave its opinion that there are no contradictions with the Constitution which means that the President has only one option – to sign it. Even if he doesn’t, it can be signed by the Speaker of the National Assembly. It means that my signing or not signing it doesn’t really matter,” President Sarkissian said. “I hope that discussions about the Convention will become not the end but the beginning of public debates. It is very important because it is about our children. Our culture differs a lot from that of 46 other states which signed the Convention. Each of them will adopt and create solutions which are in line with their vision of the state, statehood, culture, future, and children.”