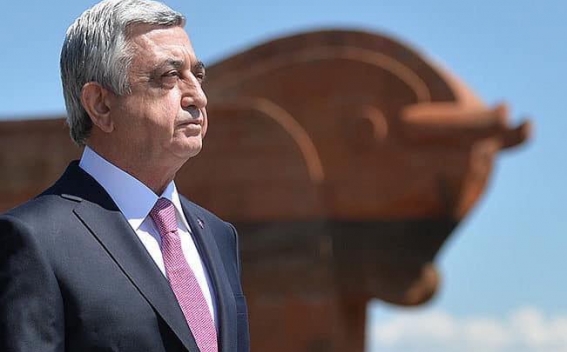 On 28 May RA Third President Serzh Sargsyan sent a congratulatory address in connection with the Day of the First Armenian Republic.

This day is of special significance for the Armenian people, and it stands out among the state holidays, which celebrate the May victories.

In 1918, our people – servicemen, farmers, intellectuals and clergy - waged an unequal fight against the Turkish regular army in Sardarapat, Bash-Aparan, and Gharakilisa: they fought to the last and eventually stopped the advance of Turkish invaders.

During the May heroic battles, the ringing bells of the Mother Cathedral sounded like a call to arms and a call for nationwide struggle for faithful Armenians. It was a struggle for survival, where the Armenians could not but rely on their own strength. And this is one of the most important lessons of history.

“Nobody cares for us with the idea of providing tangible assistance. We cannot but rely on our own resources in both defending the frontline and in enforcing public order in the country,” wrote Aram Manukyan, one of the brightest figures in our history, just months before the May heroic battles.

History once again teaches us to rely first and foremost on our own strength and not foolishly waste away our assets; not to draw up dividing lines and weaken our ethnic immunity through incompetent rule, especially when the adversary cynically distorts history and regrets its failure to bring to completion what it had planned a century ago.

We will face again the same threat if we do not take lessons from history. One of those lessons is to give due credit to heroes otherwise nations will be subjected to new trials that can be fatal.

Tovmas Nazarbekyan, Movses Silikyan, Garegin Nzhdeh and many other great commanders and officers, who crowned the May battles with a brilliant victory, were declared traitors to the nation, persecuted by the authorities of their own country, shot or spent the last years of their lives in prisons and exile.

Of course, time puts everything in its place. Today, generations are educated by the example of those heroes of our May victories, their names are commemorated and glorified on public holidays, but they were not given what they deserved during their lifetime, which was a biggest mistake. One should not rely only on the fairest of times. We need to study the lessons of the past in order not to avoid the previous mistakes

At this very time about a century ago, the Armenian people not only survived the threat of extermination, but also restored the independent statehood in a small part of their historical homeland. Just three years before that, our people, who were subjected to genocide by Ottoman Turkey in Western Armenia and suffered many inhumane deprivations and sufferings throughout their history, reaffirmed their will to live. No one can threaten a nation that boasts a powerful army, well-established state institutions, unity and a fighting spirit.

The May victories undoubtedly became possible owing to our heroic soldiers’ dedication to the defense of their homeland, their great faith in Armenia’s salvation and bright future. The Armenian people, who made their march of millennia unstoppable in one difficult period of history, won the right to live and create in their homeland. Only a year later, in May 1919, the Council of Ministers decided to found a university in Yerevan, the capital of the war-torn newly independent Republic of Armenia. Doesn’t this characterize our people?

Eternal glory to those who restored the independent Armenian statehood and to those brave statesmen who selflessly laid the foundations of the First Republic of Armenia! Let us be worthy of their heroic deeds and immortal memory of our heroic ancestors.

Congratulations again on the Republic Day! I wish all of us peaceful work, high sense of civic responsibility and consciousness and devotion to our national goals.

Long live the Republic of Armenia!"