Karabakh President to Azerbaijan Counterpart: Have You Chosen Path to Solving Issue Through Force? 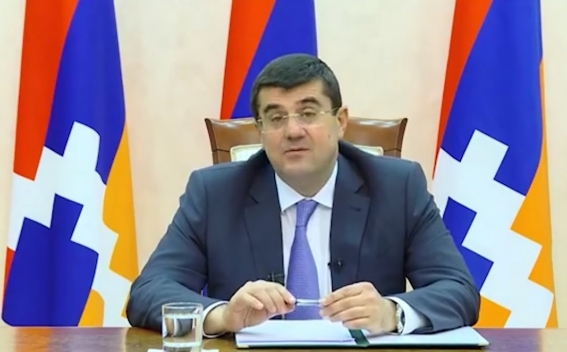 We are trying to create a new atmosphere and situation of solidarity; it is very important. Artsakh (Nagorno-Karabakh) newly inaugurated President Arayik Haroutyunyan on Friday stated this live on his Facebook page, referring to the reappointment of Masis Mayilian to the post of Foreign Minister, and ex-defense minister and Defense Army commander Samvel Babayan’s appointment to the post of Secretary of the Security Council, News.am reports.

"I do not mention this by accident because [Azerbaijan President] Ilham Aliyev made his next statements yesterday. Of course, I don't want to offend, but they were not statements worthy of a politician, especially this statement: ‘The force factor is becoming a priority in the world.’ In other words, did you choose the path to solve the issue through force? Mr. Aliyev, we are ready [for that], and I want to also assure you that the results are clear to us; you will have also today what you had in 1994. Never try to speak to us in the language of force!” the Artsakh President said.