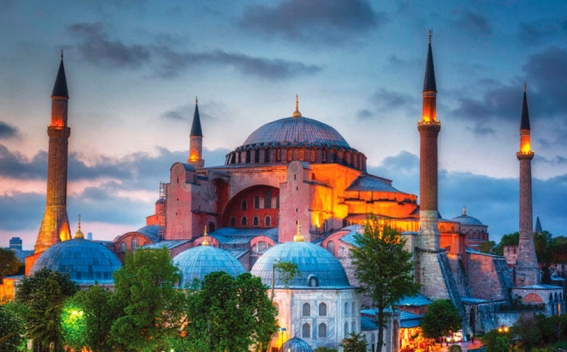 Turkish President Recep Tayyip Erdogan has instructed government officials to conduct a study on how to convert Istanbul's famous Hagia Sophia Byzantine-era cathedral, currently a museum, into a mosque. Hagia Sophia was reopened as a museum in 1935. It is a UNESCO World Heritage Site, Panorama.am reports.

A petition requesting UNESCO to save Hagia Sophia has been launched. According to the petition titled ''Tell UNESCO to save Hagia Sophia!'', the undersigned are joining In Defense of Christians (IDC), the Armenian National Committee of America (ANCA) and the Hellenic American Leadership Council (HALC) asking the organization to respond to Turkey’s continued threats to violate Hagia Sophia’s status as a UNESCO World Heritage Site by converting the museum into a mosque.

''Turkey’s continued targeting of the Hagia Sophia, which is part of our collective heritage, is unacceptable.

''We agree with the Greek Foreign Ministry’s observation that ''This action is an insult to the international community and once again exposes Turkey, which has an obligation to respect both the Convention Concerning the Protection of the World Cultural and Natural Heritage and UNESCO, of which it is a member.''

''Neither silence nor quiet diplomacy have proven to temper Turkey’s outrageous behavior.  A lack of a strong UNESCO response at this point constitutes complicity with Turkey’s attempts to eradicate Christian heritage and ultimately Christian minorities,'' the petition reads.