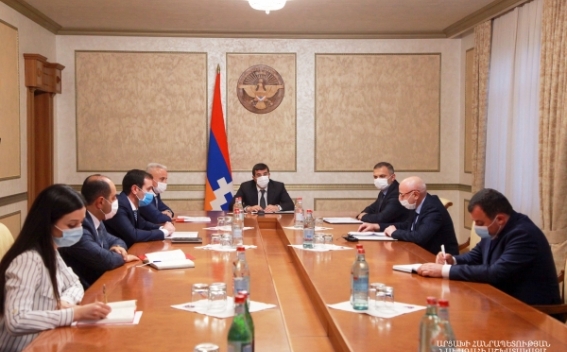 On 15 June Artsakh Republic President Arayik Harutyunyan convened an enlarged working consultation to discuss the assessment of the damage caused by the pest (unpaired silkworm) that appeared in the forestry of the republic and measures to combat it.
Artsakh Republic minister of Agriculture, minister of Territorial Administration and Development, chairman of the Nature Protection Committee and other responsible officials of the sphere were present at the consultation.
Chairman of the Nature Protection Committee Felix Gabrielyan delivered a report noting in particular that the time of effective fight against these pests is the early spring period, which should be done by air spraying. According to the Committee chairman, in the current stage the fight against those pests is inefficient as they are widespread. Besides, due to biological changes they will soon be inactive.

The Head of the State strongly reacted to the provided argumentation highlighting that the current situation resulted from the shortcomings of the people in charge of the field. He instructed to form a specialized commission within a short period of time, study the extent of the damage, elaborate measures to combat the pests stressing that all those responsible will be held accountable.