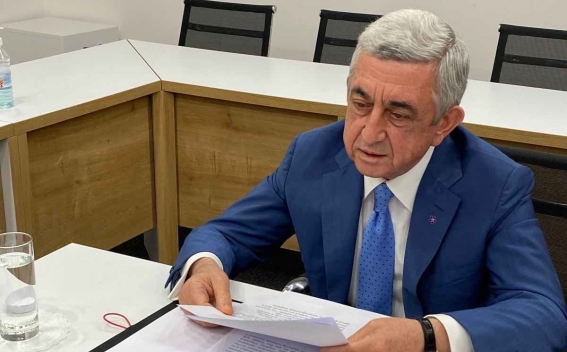 Third President of the Republic of Armenia, President of the Republican Party of Armenia Serzh Sargsyan partook in a Brussels-hosted videoconference of European People’s Party (EPP) Eastern Partnership leaders, chaired by EPP President Donald Tusk.
The meeting was attended by European Commission President Ursula von der Leyen, heads of state and government of a number of political parties representing EPP-member Eastern Partnership countries, opposition leaders from EPP-member states, as well as representatives of the EPP leadership, Eastern Partnership countries, Euronest and the European Parliament.
President Sargsyan delivered a speech, in which he touched upon a number of important issues relating to Armenia’s domestic, foreign policies and security. Serzh Sargsyan spoke about the current health and socio-economic situation in the country, as well as about another extremely dangerous aspect of the internal political situation caused by the incompetent management of the incumbent authorities of Armenia, which is suffering from the political virus of populism. He briefed his European partners on Armenia’s latest domestic developments that the Executive Board of the Republican Party of Armenia strongly condemned in a statement issued yesterday.
Serzh Sargsyan next touched upon the EU-Armenia cooperation agenda and, in that context, the implementation of the Comprehensive and Enhanced Partnership Agreement, which was signed between the EU and Armenia as early as in 2017. President Sargsyan noted that the new Armenian government has failed to make effective efforts in this direction.
Highlighting the need to ensure stability and security in the South Caucasus and defy the emerging regional challenges, Serzh Sargsyan expressed his concern over Azerbaijan’s continued violations of the ceasefire regime amid the global pandemic.
President Sargsyan urged his partners to unconditionally support a peaceful settlement of the Nagorno-Karabakh conflict on the basis of those fundamental principles repeatedly stated by the OSCE Minsk Group Co-Chairs.
Հայերեն На русском