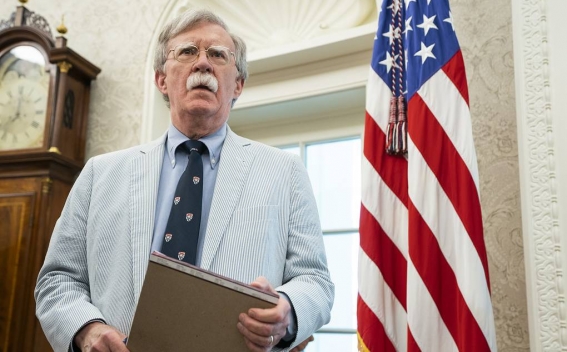 "The Erdogan call turned out to be an experience. Listening to him (his remarks were always interpreted), he sounded like Mussolini speaking from his Rome balcony, except that Erdogan was talking in that tone and volume over the phone. It was as if he were lecturing us while standing on the Resolute desk," Bolton said while revealing the details of a conversation between him, Erdoğan and his U.S. counterpart Donald Trump.

The call was held immediately after a suspected chemical attack near Syria's Damascus in 2018 that killed more than 40 people. In less than a week, the United States, Britain and France allies launched airstrikes against Syrian military targets.

Meanwhile, Bolton, in his book, called Erdoğan a dictator while he was commenting on Trump's efforts to interfere in the federal case against Halkbank in favour of Turkey and use his authority to halt any further enforcement actions against the bank.

"Specifically, however, I also wanted to brief (Attorney General William Barr) on Trump's penchant to, in effect, give personal favours to dictators he liked, such as the criminal cases of Halkbank, ZTE, potentially Huawei, and who knew what else," Bolton said.

Halkbank is accused of involvement in a massive scheme to circumvent sanctions on Iran. The indictment states that Turkish-Iranian businessman Reza Zarrab bribed high-ranking officials, including a Turkish minister, to help divert Iranian oil revenues through Halkbank with the help of fictitious trades.