"I See Myself as Ambassador Between Armenia and the World", Says President Sarkissian 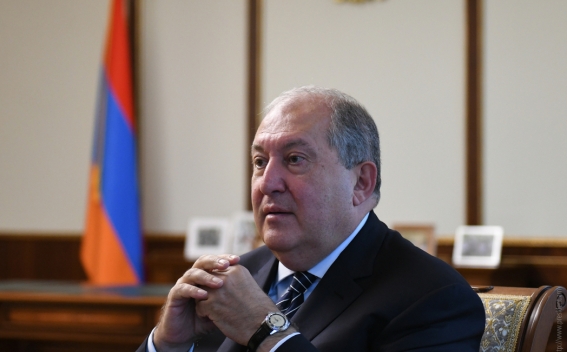 The Constitution in the parliamentary republic doesn’t imply any leverages of executive power for the president as the head of state, President of Armenia Armen Sarkissian said in interview to the Azg, Diaspora-Armenian Payqar and Armenian Mirror-Spectator newspapers, Armenpress reports.

Asked how the President thinks the current situation can be overcome, Sarkissian said:"My task, as a president who passed a long path, is to find solutions to the systematic problems, as well as to be the advocate of the integration of the nation and the statehood. I see the main function of the presidential institute in this. Regardless of what is the description of any particular position, the person holding a position is forming the result. I am trying to put the meaning in the activity of the President of the Republic which I think is right and useful. You can have the world’s biggest responsibility, all opportunities, but do nothing. And the opposite, you can have one and use it. There is no need to think of what leverage, tool you have, the important is to achieve the goal".

Armen Sarkissian said he first of all is taking steps to develop and strengthen the presidential institute which must be rebuilt in a way to be able to ensure the state’s stability and internal balance, the unity of the people under the parliamentary system of governance."On the other hand, we have received such a historical heritage that every Armenian forces a political leader to perceive his work as a mission", he said, adding:"It’s impossible to build a viable state without that consciousness, without a deep analysis of that historical heritage and the future programs deriving from it. We are a surviving nation and as a developing country having a strategic position and as a global nation we have something to say to the world. In this sense I see myself as a mediator, as an ambassador between Armenia and the world".

The President expressed hope that the public discussions and debates over various issues will bring a pro-national result."The systematic approach is not only a necessity, but also has no alternative as we are facing global changes and these changes are taking place in front of us", he said.