Second Group of French Doctors to Arrive in Armenia Soon 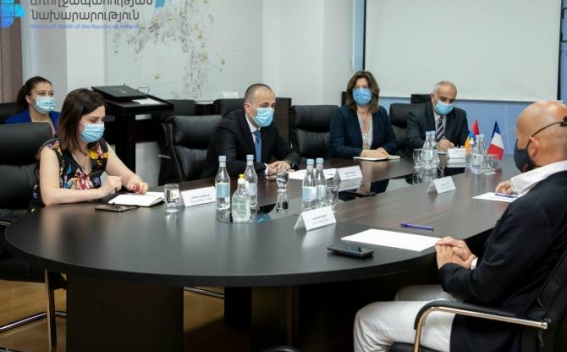 Minister of Healthcare of Armenia Arsen Torosyan received French Ambassador to Armenia Jonathan Lacôte, Head of the Office of the High Commissioner for Diaspora Affairs Sara Anjargolyan and the French doctors led by their team head Alexandre Mignon, the ministry reports.

The French doctors arrived in Armenia on June 14 and for 10 days together with the local specialists they have been engaged in the treatment process of coronavirus patients, did their utmost for the citizens to overcome the disease.

"In this situation we are entering a new stage of relations in the healthcare sector of France and Armenia", the French Ambassador said.

The next group of French doctors will arrive in Armenia today in the evening.

"The mission of our Office is to strengthen the Armenia-Diaspora ties, but in this fight we are making efforts also for such initiatives, and are glad that the next group of French doctors will be headed by a Diaspora-Armenian doctor", Sara Anjarolyan said.

In turn the Armenian healthcare minister thanked the Ambassador for the support provided by France, and handed over certificates of gratitude to the French doctors.