Vladimir Putin and Emmanuel Macron Will Hold a Video Conference 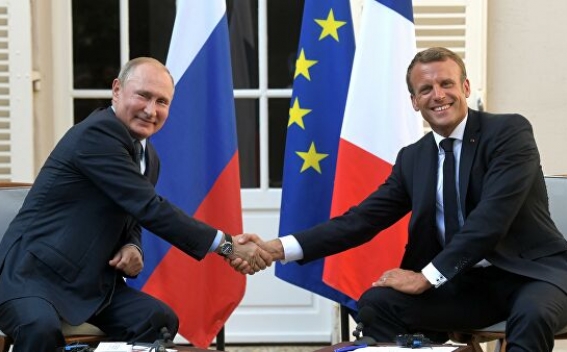 Presidents of Russia and France, Vladimir Putin and Emmanuel Macron, will discuss relations of Moscow and Paris, as well as various crisis situations at the video conference scheduled for June 26, reports TASS.

"The video conference of President Putin and the President of France is scheduled for Friday, they will talk privately," Kremlin spokesman Dmitry Peskov told journalists.  "We expect the very beginning of the conference to be open to the mass media, we will publish the footage," the spokesman said.

"First and foremost, we expect the two leaders to exchange opinions on bilateral Russian-French relations; this will also be a good opportunity to discuss various crisis situation: the Ukrainian settlement, Syria, Libya," Peskov said, adding that "discussion of other topics that the two presidents would deem necessary, is also possible."

Earlier, the Elysee Palace announced Macron’s plans to have talks with Putin on June 26. Paris named strategic balance issues, Libya, Iran, the coronavirus spread, and the main crises on the UN Security Council agenda among the topics to be discussed.