Artsakh: Issues Facing the Martakert Region will be Solved in Accordance with the Priorities 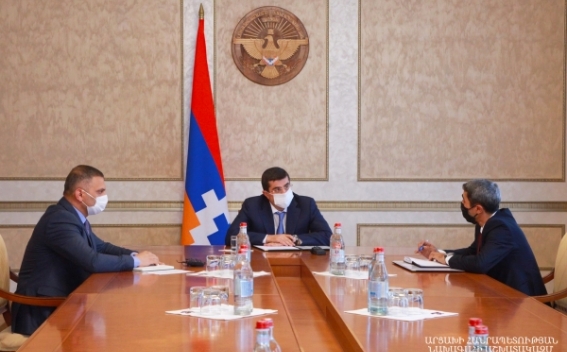 On 25 June Artsakh Republic President Arayik Harutyunyan received head of the Martakert regional administration Hayk Bakhshiyan to discuss issues facing the region and ways of their solution.
In his report head of the regional administration Hayk Bakhshiyan presented information on the process of state programs being carried out in the region, harvest activities and issues requiring a prompt solution. He particularly touched upon problems relating to the drinking and irrigation water shortage caused in a number of communities of the region as a result of a drought, issues of housing construction, and reconstruction of inter-community roads.
The President noted that within the framework of realization of social programs, 100 million drams will be allocated from the state budget for the purchase of building materials, loan of another 100 million drams will be provided to "Jraberdshin" company for the solution of urgent problems arising during the construction works.
Referring to the agricultural problems existing in the region, Arayik Harutyunyan noted that the government will assist those land users, who have suffered from low barley yields this year by providing them with barley seeds. The President added that the irrigation issue of fields in the Martakert region will soon be resolved since the transfer of the waters of the Sarsang reservoir to the right-bank of the River Tartar will begin in the near future.
According to the Head of the State, large financial means will be allocated for paving of the inter-community roads, solution of the housing issues of families of perished freedom-fighters, first degree military disabled people and those with many children, as well as other social groups.
Artsakh Republic Minister of Territorial Administration and Development Zhirayr Mirzoyan partook at the meeting.