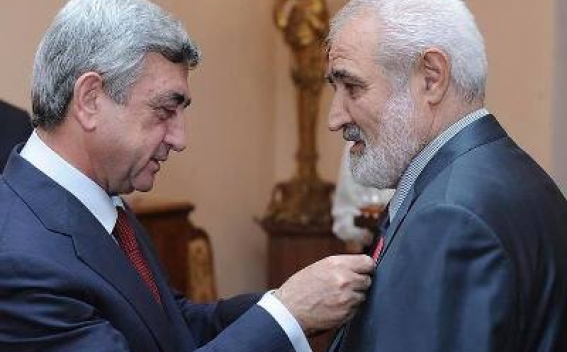 Third President of the Republic of Armenia Serzh Sargsyan today held a telephone conversation with renowned Armenian poet, publicist Razmik Davoyan. Serzh Sargsyan offered Mr/ Davoyan birthday greetings and best wishes on the occasion of his 80th birth anniversary. President Sargsyan has also sent the well-known intellectual a congratulatory message, which reads:
“Dear Mr. Davoyan,
Please accept my warmest congratulations on your 80th birthday.
You are one of those happy writers who during their lifetime enjoyed thousands of readers’ love and appreciation. Your art is appraised far beyond Armenia’s borders through your works translated into different languages. My family and I are among your devoted readers.
I am sincerely glad that your services to the Motherland have been appreciated by the state, both during the Soviet years and following Armenia’s independence. Being one of the most prominent figures of modern Armenian poetry and a living legend of Armenian literature, you have bridged two different epochs: you carry in you the memories, anxieties, hopes, disappointments, struggles and dreams of your time, and sometimes the bitterness of reality.
One can hardly overestimate the power of your art, which has its source in the philosophy of “vital energy transfer.” Your boundless devotion to the Armenian Army that came to light since the very first days of Armenia’s independence deserves special appreciation. “I have an inner conviction that our guys standing at the border need my word,” you once said. I have had many opportunities to see you next to our soldiers with your honest and straightforward attitude.
Congratulations again on your jubilee! I wish you robust health, inexhaustible energy and ever new creative achievements.”
Հայերեն На русском