PM: We See the Way Out in Citizens’ Improved Behavior and Collaboration 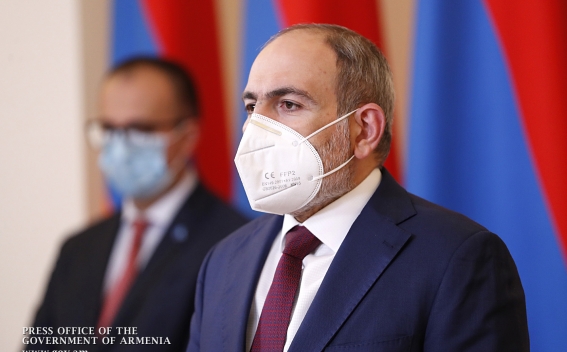 After today’s meeting of the Commandant’s Office, Prime Minister Nikol Pashinyan held a news briefing with Minister of Healthcare Arsen Torosyan. To begin with, the Prime Minister noted that the situation with COVID-19 remains tense in Armeniaas nearly a thousand new cases were reported over last weekend, and the healthcare system continues to work under pressure.

“Bad news keeps coming in from Armenia and all over the world. The situation seemed to have been under control in many countries, but there are signs of an emerging new wave, which narrows down the picture of the current situation even more,” Nikol Pashinyan said.

The Prime Minister stressed that the government’s strategy remains the same. “We see the way out in citizens’ improved behavior and collaboration. The administrative methods cannot work alone. On Saturday, I took a trip to Avan District, handed out masks. I can say that the main problem is that citizens do not believe in the impact of changes in individual behavior on the situation. It came as a surprise to me that many citizens reported no infection in their surroundings. This makes the task even more difficult. The right behavior is not to wait until trouble comes, but to take note of the official statistics,” Nikol Pashinyan said.

The Premier noted that citizens should be encouraged ahead to abide by the proposed safety rules: wear a mask everywhere and practice social distancing.

Healthcare Minister Arsen Torosyan advised that unfortunately 30% of the tests performed have proved positive. “Good news is that there is no growth in that respect, but it is too bad that figures remain high in absolute terms. Our total bed stock had reached 2,600 as of yesterday, of which 2,300 - regular beds, most of them equipped with central oxygen supply, while about 300 are reanimation beds. Medical staff works under pressure especially in intensive care units. The total number of severe and extremely severe cases is about 650; 47 patients are connected to artificial respiration. As of 15:00, we had no patients in urgent need of in-patient care, left waiting for hospitalization. We have 20 patients who need to be transferred to specialized centers from other hospitals,” the Minister said.

The Minister said the government’s anti-epidemic measures accounted for the fact that we have relatively stable daily statistics. “Epidemics like this usually spread like wildfire, but we do not have such a situation. In other words, wearing masks has proven to be effective. If it weren’t for that, we would have more cases now. That is, wearing masks works. Just as we never leave home without wearing shoes, we should not either go out without a mask, and we should not lower the mask away from home,” Arsen Torosyan concluded.