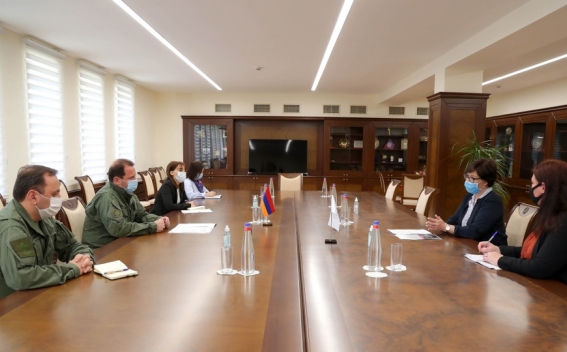 Minister of Defense of Armenia Davit Tonoyan today received representatives of the Delegation of the International Committee of the Red Cross to Armenia led by Head of the ICRC Delegation Claire Meytraud, News.am reports.

During the meeting, the parties touched upon the current issues on cooperation between the Ministry of Defense and the Delegation of the International Committee of the Red Cross to Armenia, actions on the agenda, as well as the opportunities for increasing effectiveness of the cooperation and future actions.

The interlocutors discussed issues related to the destinies of citizens of Armenia Karen Ghazaryan and Ara Ghazaryan, who involuntarily found themselves in Azerbaijan and are in captivity, attached importance to the coordinated actions of the Offices of the Red Cross in Yerevan and Baku to ensure regular visits and correspondence with the captives’ families.

The parties also touched upon the issues for clarifying the destinies of people who have been missing as a result of the Nagorno-Karabakh conflict, as well as other problems related to combination of efforts by the Commission on Prisoners of War, Hostages and Missing Persons of Armenia and the ICRC.

At the end, Tonoyan expressed gratitude to the Head of the ICRC Delegation to Armenia for supporting the Armenian government’s efforts within the scope of the fight against the coronavirus pandemic.