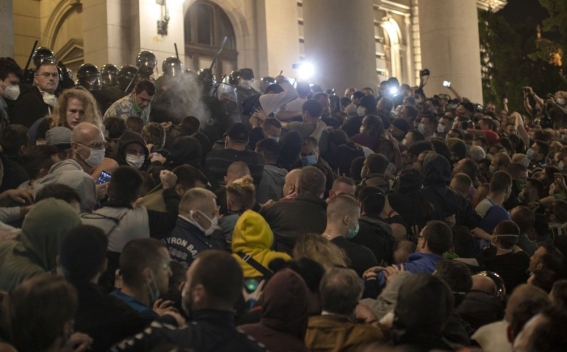 Thousands of protesters fought running battles with police and tried to storm the parliament building in Belgrade on Tuesday after the Serbian president announced that a coronavirus lockdown will be reintroduced in the Balkan country, AP reports.

Police fired several rounds of tear gas at the protesters, some chanting “Resignation! Resignation!” as they gathered in front of the downtown parliament building in the Serbian capital. Some of the protesters briefly managed to enter the parliament by force, but were pushed back by riot police.

The protesters responded by hurling flares, stones, bottles and eggs at the police. Several clashes erupted between some of the most extremist rioters apparently belonging to far-right groups and the baton-wielding police.

Protesters also clashed with police in front of the state TV building. The broadcaster is accused by the opposition of having a pro-government bias.

A number of police vehicles were set on fire.