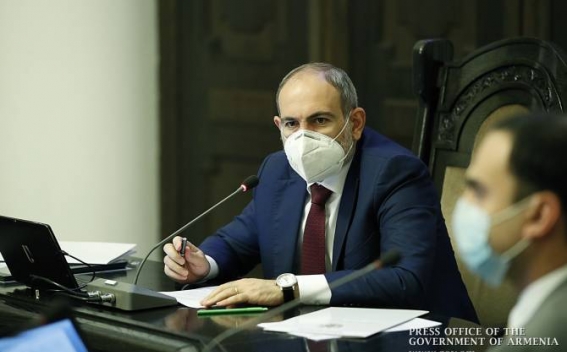 At the beginning of the Government’s extraordinary meeting of July 13, Prime Minister Nikol Pashinyan referred to the military incident on the Armenian-Azerbaijani border. Minister of Defense David Tonoyan and Minister of Foreign Affairs Zohrab Mnatsakanyan reported on the current situation.

The Premier stated in his remarks:
“Dear colleagues, dear citizens!

Yesterday, on July 12th, the Azerbaijani Armed Forces carried out provocative actions on the Armenian-Azerbaijani border, attacking our border positions in the direction of Movses village, Tavush region.

We strongly condemn the provocative actions of the Azerbaijani armed forces, which resumed this morning.

With their resumption, the political-military leadership of Azerbaijan will bear all the responsibility for the unpredictable consequences of undermining regional stability. By the same token we are deeply concerned about Turkey’s attempt to undermine regional stability, which is best illustrated in the official statement of the country’s Foreign Ministry, where the latter unconditionally supports Azerbaijan’s actions, within its explicit and traditional anti-Armenian stance.

This military incident did not occur in a vacuum. For a while the Azerbaijani leadership has been trying to play the anti-Armenian card for their well-known reasons. It is possible that we are dealing with the situation wherein the political-military leadership of Azerbaijan tries to respond to the domestic challenges with instigating escalation on borders and undertaking meaningless actions, in disregard towards the human lives, including the lives of Azerbaijani soldiers.

Instead of calling on its own people to abide by the preventative healthcare measures against the spread of the pandemic, the Azerbaijani leadership issues war threats, as if the anti-Armenian rhetoric is the best remedy against the coronavirus.

I assure you that no provocative action goes unanswered.

I call on all our compatriots to express their unconditional support to our armed forces, their soldiers and commanders, who are currently standing firm in defending our homeland. They must have strong backing, each of us is a part of it.

I urge our compatriots to trust only official sources. The information resilience of our society in this period is one of the strongest assurances of the victory of the Armenian Army. Mr. Tonoyan, what information can you provide, what happened yesterday, what is the situation today, now ”

Minister of Defense David Tonoyan - Thank you. Mr. Prime Minister, dear colleagues, yesterday at 12.30 an UAZ car approached one of our positions, for as of yet unknown reasons, Azeri servicemen got out of the car and moved towards our position. I repeat, it is very important for everyone to know that the position is in the territory of the Republic of Armenia just on the state border of the Republic of Armenia.

That movement being unexpected for our troops, they were instructed to call on the Azeri servicemen to leave the territory of the Republic of Armenia, which was complied with. After the Azeri servicemen had regained their positions, the adversary started shelling the aforementioned Armenian position with 82-mm grenade launchers, with several combat groups approaching that very position. The Armenian side retaliated and stopped the provocation.

Suffering losses, the adversary retreated. The same scenario recurred every 15.25 minutes with the use of artillery. The shelling ceased at 03.30 to 05.30 at night. The adversary’s onslaught was silenced by targeted sniper fire, as a result of which the enemy suffered heavy losses.

Our armed forces and the relevant regiment continue to protect the state border. The operative situation is completely under full control.

Prime Minister Nikol Pashinyan - Thank you, Mr. Tonoyan. The impression is that the Azeri soldiers might have gone astray and then, for some reason, left the car after our troops’ warning. Perhaps, their provocative shelling had to do with that car as they wanted to return it.

Minister of Defense David Tonoyan - Mr. Prime Minister, if there was such a wish, it might have been expressed in some form of communication and an agreement could have been reached instead of shelling. The shelling started immediately.

Prime Minister Nikol Pashinyan - I would like to state that we have been in contact with our international partners since last night. We have already reported the situation and keep in close touch with them. Is that right, Mr. Mnatsakanyan?

Foreign Affairs Minister Zohrab Mnatsakanyan - Yes, Mr. Prime Minister. We have been in close touch with the Personal Representative of the OSCE Chairman-in-Office since yesterday. Efforts are underway in terms of information exchange and coordination. At the same time, we keep in contact with the CSTO Secretary General and CSTO-member states. We will continue to work with our partners. We are transparently reporting on the developments, Thank you.

Prime Minister Nikol Pashinyan - Well. However, let us state that our troops are confident in the situation at hand, and there is no doubt that the Armenian Armed Forces are in a position to safeguard the borders of the Republic of Armenia.