The Government of Artsakh Also Contributes to the Preservation of the Armenian Community of Lebanon. President Harutyunyan Convoked a Consultation 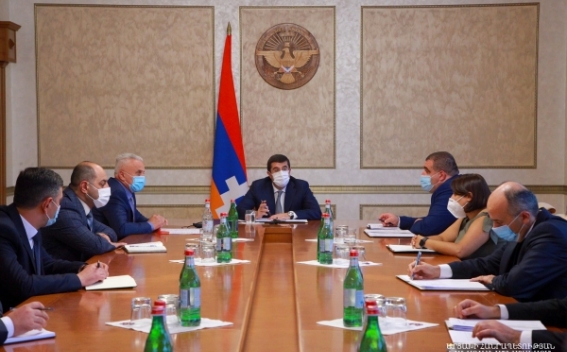 On 25 August President of the Artsakh Republic Arayik Harutyunyan convoked a working consultation dedicated to the programs of assistance provided to the Lebanese Armenians.

A report was delivered by head of the working group on the organization and coordination of activities on provision of material assistance to the Armenian community of Lebanon, chief adviser to the President of the Artsakh Republic - Ambassador at large Rudik Hyusnunts. According to him, in addition to the aid in the amount of 25 mln Armenian drams allocated from the reserve fund of the state budget, more than 17 mln drams have been collected on the Artsakh Republic Government's extrabudgetary account for humanitarian aid, and various measures are being taken to increase the amount. R. Hyusnunts also informed that the first two repatriant families had arrived in Artsakh from Lebanon and all conditions have been created for their residence.

President Harutyunyan stressed that despite the crucial necessity of preserving the integrity of Armenian community of Lebanon, to which the Government of Artsakh contributes to the extent of its capacities, those of our compatriots who would like to move to Artsakh, would be provided with accomodation, job, as well as other social guarantees.