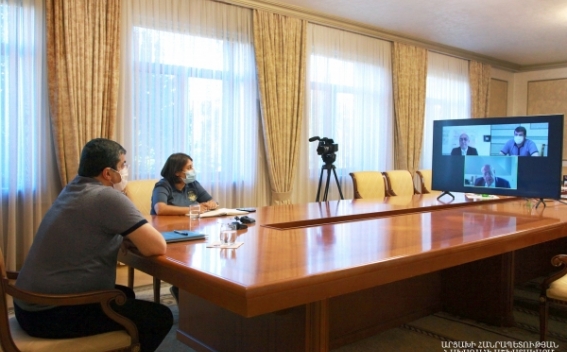 On 26 August Artsakh Republic President Arayik Harutyunyan had a conversation via video call with president of the Armenian General Benevolent Union Perch Sedrakyan and director of the AGBU Armenian Representation Vazgen Yacoubian.
The President rated high the activity of the AGBU both in the homeland and within the Armenian Diaspora, underlining that the programs being realized are not only demanded but also have a vital significance. Touching upon the subject of the Union's center being constructed in Stepanakert, President Harutyunyan expressed confidence that it will become a new bridge for cementing the current cooperation.
The responsible officials of the AGBU informed that along with programs being realized in Artsakh in the spheres of agriculture, education, culture and repatriation, the Union also studies the potential of Artsakh small and medium entrepreneurship eco-system for launching new programs in this direction.
President Harutyunyan expressed gratitude to his interlocutors for consistent and close partnership emphasizing that the authorities of Artsakh will spare no effort for the realization of the existing potential.
Advisor to the Artsakh Republic President, President's representative at large on Diaspora issues Azatouhi Simonyan partook in the discussions.