President Armen Sarkissian Had a Phone Conversation with the Distinguished Physician 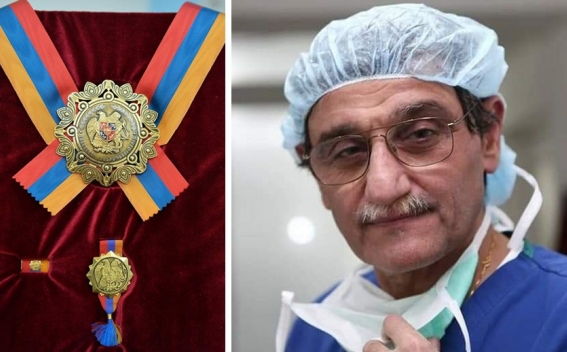 President Armen Sarkissian had a phone conversation with the distinguished physician, cardiac surgeon Hrayr Hovaguiamian who recently received the National Hero Award and the Order of the Homeland of the Republic of Armenia.

President Sarkissian noted as symbolic that Hrayr Hovaguimian is the first doctor to receive the National Hero Award and congratulated the distinguished physician, wished him good health, and new achievements.

The President hailed Hrayr Hovaguimian’s services to the Fatherland and the nation, his dedicated professional and humanitarian work of a cardiac surgeon who has saved multiple lives.

The President of Armenia viewed as momentous Dr. Hovaguimian’s arrival to Armenia nearly 30 years ago. Through his participation, in Nork-Marakh medical center of Yerevan, the children’s surgery department was opened in 1993, and the department of cardiac surgery for adults in 1996. Dr. Hovaguimian’s work in Armenia gave a second chance for life to multiple kids. President Armen Sarkissian noted that the National Hero Award is also a token of appreciation to our great compatriot from that kids and their families.

The talented doctor noted that currently his main objective is to pass on his knowledge and experience to a younger generation so that young, educated and skillful specialists ensure a continuity in the department’s development and success.

On the behalf of our compatriots and his own behalf, President Sarkissian expressed gratitude to Dr. Hovaguimian for his work and humanism. He expressed hope that would have the opportunity to meet with him in Yerevan and hand him the highest award of the Fatherland.