Feast of Exaltation of the Holy Cross 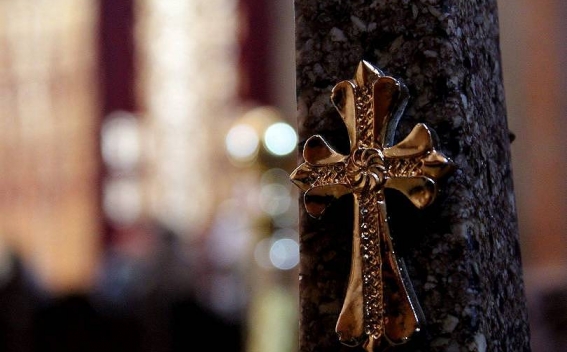 In 610 A. D, the Persian King Khosrov with a large army attacks the Byzantine Empire. Enthusiastic about the initial victory, in 614 A. D. the Persian army enters Jerusalem. Many people are killed and many are imprisoned. Pontiff Zakaria, the Patriarch of Jerusalem is imprisoned, too. However, the Persians are not satisfied and enter the Church of Holy Sepulcher and take the Holy Cross kept in the Church. The Holy Cross had been found and installed in the Church for the Christians to worship by Heghineh, the mother of the King Costandianos, in the beginning of the 4th century.

In 628 A. D., the Byzantine army led by the King Herakles fight against the Persians to return the Holy Cross. The Armenian army regiment, led by Mzhezh Gnounie, supported the Persian army. With the Lord’s help the Byzantine army wins the battle.
The Holy Cross is solemnly brought to the Armenian town Karin, from where it is carried to Constantinople, and then - to Jerusalem. On the way the Holy Cross was raised for the people to see and worship.

For Christians the Cross is God’s power and strength and pride of all prides, on which Christ’s innocent blood was shed. By means of the Cross Jesus proved His love towards mankind, and the Cross became for us the symbol of hope, love and saving.