Armenia And Nagorno-Karabakh Have All The Capacity To Defend Themselves: Zohrab Mnatsakanyan During The Joint Press Conference With Foreign Minister Of Egypt 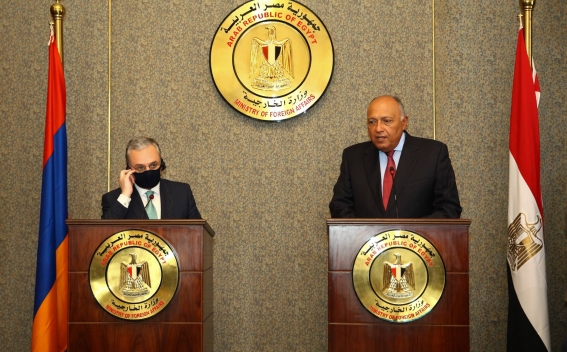 Within the framework of his official visit to the Arab Republic of Egypt, the Minister of Foreign Affairs of Armenia Zohrab Mnatsakanyan met on September 13 with the Minister of Foreign Affairs of Egypt Sameh Shukri. The joint press conference followed the meeting of the Foreign Ministers, during which the RA Foreign Minister made a speech and answered the journalists' questions.

Remarks and answer to a question of journalist see below:

"Thank you very much, dear Sameh, for the very warm hospitality that we are enjoying throughout this visit.

It is my first visit to the Middle East and North Africa in my capacity as Foreign Minister of Armenia, and it starts from Egypt. A country, which was the first among the Arab countries to recognize the independence of Armenia and back in 1992 host the first diplomatic mission of Armenia in the Middle East.

Relations between our countries, our nations are not assessed exclusively through the prism of these past 28 years. We are privileged to share time-honored relations with Egypt and with the Arab world. It is a relationship of trust and friendship between our peoples. In various parts of history and today as well Armenians have been a part of Egypt, part of its civilization, integral part of the Middle East.

In the very difficult part of our history when the survival of the Armenian people was at stake, Egypt along with other Arab countries received thousands of Armenians fleeing from the horrors of the Genocide in the Ottoman Empire.

Our compatriots made an important contribution to the establishment and development of the state institutions of Egypt and we take great pride in that. Armenians, my compatriots, are provided with all the opportunities to maintain their national identity, their language and traditions. They are proud citizens of Egypt, they are proud Egyptians, and they are provided with every opportunity to also manifest and celebrate their national identity as Armenians and of course, we are deeply grateful to the Government and the people of Egypt for these efforts and the protection of our people.

It is a community of about ten thousand people here, and they are, of course, the bridge through genuine deeply-rooted friendship between our nations.

With Egypt we have very firmly established friendship and very practical relations and this visit is also an opportunity in manifesting, assessing our present state of play in our relations and also we share similar interests in peace, security and development. We know that we have been doing best when we were working together and closely cooperating with each other.

We had a very good discussion in our bilateral agenda, and here we see a good and interesting potential; we are keen to take practical steps in this direction. We have enhanced political dialogue with Egypt, we have trade-economic, cultural relations between our countries. We believe that in the IT sector, in e-governance, in pharmaceuticals, in tourism and education we have interesting potential to further expand, and we will certainly continue doing that.

We have the respective platforms for that: we have the platform of political consultations, the Intergovernmental Commission, and of course the dialogue between the leaders. We do absolutely look forward to welcoming the President of Egypt in Armenia, and I personally also look forward to welcoming my good friend Sameh in Armenia. The visit of the President, that we have in mind and look forward to working very closely together, is an important deadline in our mind to work to consolidate all those important issues of bilateral cooperation.

Within the context of bilateral cooperation, we also value the interest of Egypt in working closely with the Eurasian Economic Union. There is an ongoing negotiating process to sign the free trade agreement and Armenia is very interested to have this process successfully concluded and to have this agreement signed. We will work closely with Egypt and with our partners in the EAEU to achieve this objective.

We have had very extensive discussion on many issues of regional and global security. We’ve exchanged views on recent developments in our respective regions. And we see as never before specifically those developments do underline the need for security and for peace in the region. As we see the serious challenges, the security challenges are expanding from the Eastern Mediterranean to the Middle East, to North Africa -we see the same challenges in the South Caucasus. They are interrelated, characterized by the same sources of destabilization.

We have been following closely the developments in the East Mediterranean, we are in solidarity with Greece and Cyprus on their inalienable rights to economic activities in the exclusive economic zone in line with international law. I want to also emphasize our solidarity and support to Egypt in the same way.

Any attempt to export instability and escalation to different regions as part of power projection is deplorable whether it is in North Africa or in the South Caucasus. Transnational threats, including that of movement or transfer of foreign terrorist fighters to conflict areas are of great concern, they are deplorable and they should be addressed.

I also briefed my colleague on the developments in our region and the recent escalation due to the aggression of Azerbaijan on the state border of Armenia. We are fully committed to this approach that conflict situations are different; if there is any commonality, it is that there is no military solution to any of them. Only peaceful dialogue, peaceful process, involvement of all stakeholders and ability to move towards a compromise are the important ways of resolving conflicts. We need peacemakers who are able to draw red lines to war. In this regard, Armenia appreciates the strong commitment of Egypt to peace and stability everywhere, including in Libya. We very much welcome your efforts in this regard.

Once again, thank you for a very warm welcome, this is an extremely important visit that I appreciate, I value and especially value that very warm hospitality that is very much extended to me, to my colleagues, to my friends. In fact that I represented here by a very strong delegation,
I mean the company of three ambassadors - the current and two former ambassadors of Armenia to Egypt, who have had very important, strong professional contributions to promoting our bilateral agenda and our broader agenda in regional and multilateral format.

Thank you very much.

Sky News Arabia: You have spoken about the depth of Armenian-Egyptian relations and the historical and future role of Egypt for Armenia conditioned by the investment of Armenians and the presence of the Armenian community. But there is still tension between Armenia and Azerbaijan. How do you assess the behavior of Turkey in the Caucasus and Eastern Mediterranean? Does this behaviour pose a danger or not?

Zohrab Mnatsakanyan: Thank you very much for the question. So far as the Nagorno-Karabakh conflict is concerned, we have been and remain extremely focused on the most important existential issues of our compatriots - the Armenians in Nagorno-Karabakh. Our focus and our ultimate priorities concern the sustainability of the very physical security of our compatriots in Nagorno-Karabakh and the question of status, the recognition of the right to self-determination and implementation of it without limitations. The security is in the heart of this very important priority for Armenia so far as the resolution is concerned. The OSCE Minsk Group Co-Chairmanship, which comprises France, Russia, and the USA, has been and remains the only important international platform, format within which we are seeking solution to this conflict. The conflict resolution can be based on compromise and compromise means that each of the parties has to take respective steps towards a balanced, measurable solution, which meets the interests of all.

It cannot be a "my way or no way" solution. Within this, I think we have the sensitivity of the international community towards this conflict. There is no such thing as bundling conflicts together and viewing them through one single prism. So far as Nagorno-Karabakh conflict is concerned, this conflict has its peculiarities, its history, its nuance, its important differences. Within this we value very much the very careful approach of all our partners towards the strictly peaceful resolution. There is no military solution to this.

We may insist on that because Armenia has all the capacity to defend itself, Nagorno-Karabakh has all the capacity to defend itself. There is only one guarantor of the security of our compatriots in Nagorno-Karabakh and that is only Armenia. We are resolute in this defence and it is with this confidence and understanding that we deny any attempts to military solution. So within this we have a good understanding of all our international partners, and we have the very careful, responsible approach of our international partners, in respect of the work of the OSCE Minsk Group Co-Chairmanship, and in respect of their endeavor for peace and stability in the region. Egypt in that sense is a very important partner for us.

Now Turkey. During the events in July, Turkey has been the only country that was taking a one-sided, very aggressive approach: one-sided in support of Azerbaijan, and aggressive approach toward Armenia and the Armenian people, in rhetoric at all levels and in action. Of course we see the military build-up that they are attempting. We are hearing about the use of the foreign terrorist fighters to be transferred to Azerbaijan or maybe they are already transferred. We see the heavy military presence, the build-up. These are exactly the moves which undermine the effort toward peace and stability in the region. We are resolute in our defense and we will also resolutely deny any such policies which project power, which are aggressive in their nature and which are of destabilizing nature. We see this power projection from Eastern Mediterranean to North Africa, to the Middle East and to the South Caucasus as well. So these are not welcomed policies at all".