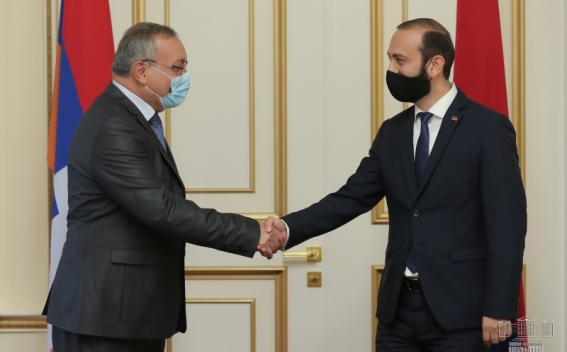 Warmly welcoming the guests in the RA National Assembly, Ararat Mirzoyan expressed his sincere satisfaction for the meeting in such format, particularly, for regularity of the contacts between the two parliaments, in general. The President of the RA National Assembly has noted that this format can become a new platform between the factions and the Committees for more concrete and thematic discussions and contacts, which will help to fill in our big national agenda, which causes necessity to regularly review by the dictate of time, to implement reforms in different directions, to find new solutions for changing challenges and re-examining and reaffirming the approaches.

The President of the National Assembly has noted that the launch of the joint work of the parliaments has successfully started and has expressed hope that in the coming years, as a result of cooperation with the RA National Assembly new quality will be succeeded to give to the law-making activities of Artsakh Parliament. In this context, he highlighted the mutual visits at the level of the NA Presidents, the Factions and the Committees.

During the private talk of the Heads of the Parliaments of Armenia and Artsakh, Ararat Mirzoyan thanked Artur Tovmasyan for the initiative of the visit and stressed that this format would occupy its unique place in joint works, more increasing the possibility and cooperation of harmonisation of the agendas.

“In parallel with our private talk, at this moment, meetings also go on between the Heads of the Factions and the Chairs of the Committees, and I shall document that the content which we try to put in these meetings, is genuinely unprecedented and we shall continue in the same style,” Ararat Mirzoyan noted.

Once again thanking the NA President for the reception, Artur Tovmasyan has underlined that there is no draft law or item proposed by Artsakh Republic, which will not be solved by the RA authorities.

During the private talk the Heads of the two parliaments discussed a number of issues directed to the development and deepening of bilateral cooperation.