No Threat Can Force the People of Artsakh to Deviate from the Chosen Path: President Harutyunyan Convened an Enlarged Consultation 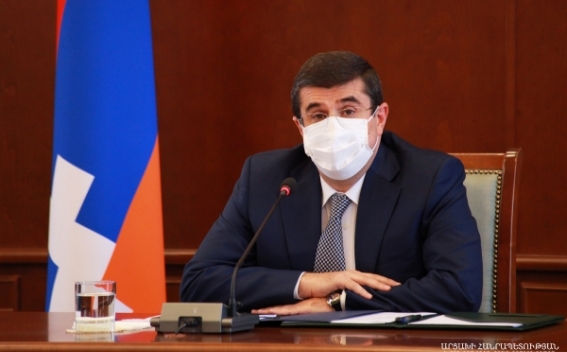 On 25 September Artsakh Republic President Arayik Harutyunyan convened an enlarged working consultation.
Prior to discussing the issues on the agenda, the President made a political statement. He noted that the statements of official Baku contributing to the conflict aggravation had lately become frequent, which can under no circumstances force the people of Artsakh to deviate from the chosen path. According to President Harutyunyan, in case of any possible provocation by the enemy, the Defense Army is ready to withdraw from the situation with flying colors and force the enemy to peace again.
The meeting agenda included the discussion of the draft government decision on defining the requirements for the structural and separate subdivisions of the state bodies of the Artsakh Republic, and norms of calculation of maintenance costs, on the basis of which the main financial document of the country must be drawn up by the end of the year.
The President remarked, that works on developing the 2021 draft state budget have started, and the medium-term expenditure program is almost ready. Discussions with government representatives and political forces have been held in various formats on the formation and improvement of the efficiency of the state budget for 2021.
According to the President, the "Free Homeland-UCA" parties coalition and the "United Homeland" party have signed a memorandum which should be reflected in the draft state budget as well. After being drawn up, the draft budget will be submitted to the Artsakh Republic National Assembly and after the adoption it will become the main financial document of the country.
During the consultation, Arayik Harutyunyan touched upon a number of issues of public concern providing answers to them.
"I assure you once again that the President's program is elaborated based on the memorandum signed between the "Free Homeland-UCA" parties coalition and "United Homeland" party. The President of the republic runs the country through the established state structures. Main socio-economic issues our people are concerned with are included in the President's program. Thе program will provide solutions to all the issues proceeding from the existing challenges," the President added.
According to A. Harutyunyan, the main challenge of the President in the pre-election period was ensuring a high pace of economic development in the years to come, and taking into account the spread of the novel coronavirus - a stable economy.
"As of September 1, preliminary economic indices did not record a decline. I have stated that the republic of Artsakh will be positioned among the unique countries in the world that will not have an economic downturn in 2020," A. Harutyunyan said in particular.
The President touched also upon a number of issues concerning the introduction of free healthcare system, housing, wage increase, personnel policy, optimization of the work of various state structures, reduction of electricity tariffs, quality and affordable communication, capital construction and other spheres.
In words of the Head of the State, radical changes are also expected towards reducing the vehicle fleet of the state structures and costs of their maintenance. "State structures will mainly have a limited number of vehicles. If necessary, they can use taxi services," the President said.
A. Harutyunyan gave instructions to the heads of relevant structures and highlighted once again that the work being carried out will be under the strictest control.