The Aggression Is Preplanned not Just by Azerbaijan but with the Massive Support of Turkey: Armenia's FM 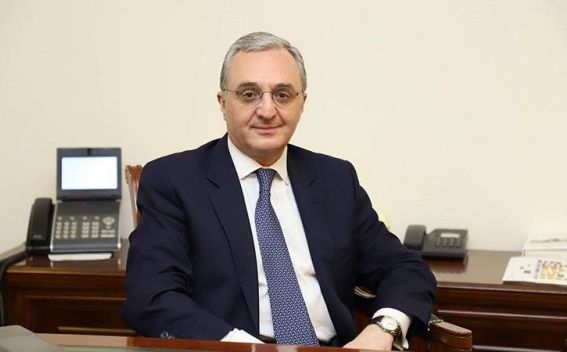 The following is the full text of the interview:

''Al Jazeera: You heard them quite clearly the Azeris saying that they won’t stop until they would liberate this territory, they are saying full-scale war. Do you consider yourself to be in a full-scale war now?

Zohrab Mnatsakanyan: What we have been hearing is exactly the choice of war and at the expense of the peace process, the breakdown of the peace negotiations by Azerbaijan and the massive attack that they have in a premeditory pre-planned manner across the entire perimeter on the line of contact between Azerbaijan and Nagorno-Karabakh. This morning has been the proof of the intentions of Azerbaijan to push for their maximalist positions in an aggressive manner to put our people at risk. We have been consistently insisting that at the heart of the Nagorno-Karabakh conflict is the security of our people and today have once again brought to prove that we have to care about the security of our compatriots, the people of Nagorno-Karabakh who have been firm on the defense of their freedom, of their security against this aggression. And the aggression is preplanned not just by Azerbaijan but with the massive support of Turkey which has its military presence and which has been showing its aggressive, unilateral support to Azerbaijan and aggressive approach towards Armenia. This is very, very disturbing and it’s a massive escalation and the consequences for which Azerbaijan bears all responsibility.

Al Jazeera: It’s also an escalation which they say you started. They actually say you attacked first at 6AM or an hour before.

Zohrab Mnatsaknayan. I totally reject this absolute disinformation which is the method of Azerbaijan. We had no intention of doing anything which would bring to escalation. Armenia has been very firm on its position that the solution is strictly through peaceful means, strictly on the basis of a compromise. We wouldn’t do anything that would be against our declared intentions. For us, as I am saying, the whole point is about the security of our compatriots. They are very firm and very resolute to defend themselves and Armenia remains a very resolute guarantor of their security. We urge Azerbaijan to stop this aggression and come to their senses and come back to the peaceful process.

Al Jazeera: Are you in a position to actually stop them if they say they are going to go to a full-scale war and liberate this territory. What position is Armenia in to defend?

Zohrab Mnatsaknayan. Nagorno-Karabakh will be defending every single inch of their land and of their security and Armenia is the guarantor. These threats of force have been very usual in the parlance of the Azerbaijani Government and in the regime in Baku, the latest was in the UN General Assembly, and they have just brought this into a practical implementation. Once again they will be repelled.

Al Jazeera: Foreign Minister, you talked about negotiation. How would you see that happening? Who would be the broker, how would you step back from the brink here.

Zohrab Mnatsakanyan: There is an established format of negotiations.That is internationally recognized format which includes mediators - the OSCE Minsk Group Co-Chairmanship comprising Russia, the United States, and France. We are in constant contact with the Co-Chair countries at all levels. And we are working towards the ways in which we can bring the whole situation back to normality for the negotiating process. We are committed to this.

However, this should not have been confused with our resolve in Nagorno-Karabakh and in Armenia to defend ourselves in Nagorno-Karabakh and in Armenia. The resolution has to be based on the compromise. The maximalist position that has been pouring out of Baku all these years has no room for progress in the negotiating process. The Prime Minister of Armenia has been consistently insisting that any solution should be acceptable to the people of Armenia, to the people of Nagorno-Karabakh, and to the people of Azerbaijan - a compromise-based solution, not a solution which only meets the demands of just one party. That is totally rejected. Azerbaijan has never reciprocated our call for a compromise solution, but they have been opting for a military solution, opting for aggressivism. And what we see now is the manifestation of this consistent policy of Azerbaijan.

Al Jazeera: The established mechanism, which you talk about for discussions, which is already in place, can that bring in orders? We have got Russia, we have got Iran, we have got France, all talking about a de-escalation, calling for de-escalation immediately, and you have also got Turkey, which squarely backs the Azeris and it seemed to be in more of a fighting mode. Can the current mechanism deal with any further threats from any other player as well?

Zohrab Mnatskanyan: A clarification: the OSCE Minsk Group Co-Chairmanship mechanism is a Co-Chairmanship of three countries comprising Russia, the United States and France.

Within these negotiations, if Azerbaijan is so “determined” to put blame on Armenia, then I’m calling on Azerbaijan to immediately accept the investigative mechanisms and the risk reduction mechanisms and the observation mechanisms for ceasefire violations we have been insisting upon for so many years and they have been rejecting exactly to cover their intentions, their bellicose and aggressive intentions and to engage in a blame game as they are doing now. If they want de-escalation they should have agreed and they can agree now on the mechanisms which can strengthen the ceasefire regime and strengthen the risk reduction.