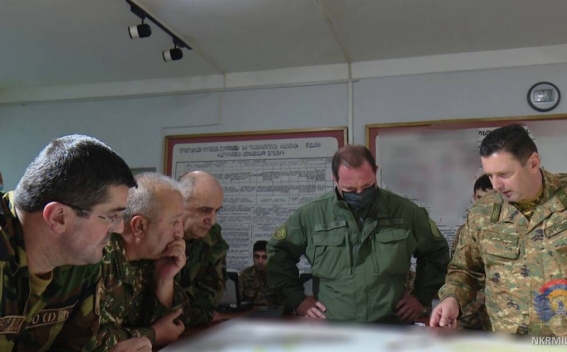 On September 28, President of the Republic of Artsakh Arayik Harutyunyan and Minister of Defense of the Republic of Armenia David Tonoyan visited the Operations Control Center of the Army to follow current and possible further developments of the ongoing hostilities along the line of contact between the Artsakh and Azerbaijani armed forces, Spokesperson of Artsakh Defense Ministry Shushan Stepanyan reports.

Major General Jalal Harutyunyan, Commander of the Defense Army, Ministry of Defense of the Republic of Artsakh, debriefed on the operational-tactical situation, all the processes carried out by the units of the Defense Army to repel the Azerbaijani aggression.

The commander of the army assured that the situation is fully under the control of the Armed Forces of the Republic of Artsakh, favorable opportunities have been created for further enhancement of registered successes.