The Provocative Actions of the Turkish Armed Forces Hinder the Efforts of the International Community to Cease the Hostilities: Armenia's MFA 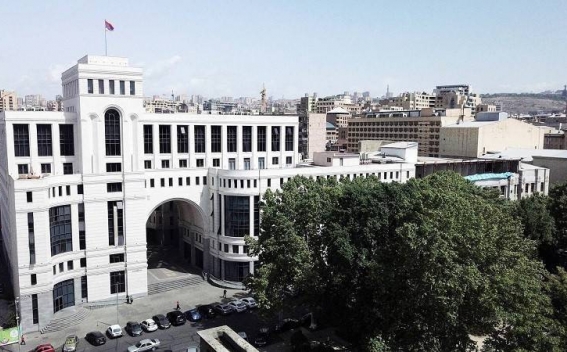 The Foreign Ministry of Armenia issued statement on the involvement of the Turkish armed forces: the statement reads as follow:

"On September 29, F-16 multifunctional fighter of the Turkish Air Forces, with base in the “Ganja” airport of Azerbaijan, downed within the airspace of the Republic of Armenia in Vardenis region the SU-25 Fighter of the Armenian Armed Forces which was carrying out combat tasks to repel the attacks of Azerbaijan on military and civilian objects. Major Valeri Danelin, pilot of the Armed Forces of Armenia, was killed.

This is not the first provocative action of the Turkish air forces. Since appearing in Azerbaijan, the Turkish air forces have been carrying out provocative flights along the line of contact between Artsakh and Azerbaijan. During the aggression unleashed by Azerbaijan, they in fact have been providing air support to the combat units of the Azerbaijani army. Notably, provocative flights by Turkey have been carried out along the Armenian-Turkish border as well, on certain instances crossing and violating the airspace of Armenia. On September 27, in the same section of the Armenian-Azerbaijani border, a Turkish F-16 airplane violated the Armenia air space and launched missiles at the Vardenis region.

The Turkish air force appeared in Azerbaijan during the large-scale Turkish-Azerbaijani military drills held from July 29 to August 13 and, since then, has not been withdrawn from Azerbaijan.

The provocative actions of the Turkish armed forces seriously undermine the regional security and hinder the efforts of the international community to cease the hostilities.

International community called on the external actors to refrain from escalating the conflict, and Turkey should heed these calls.

We strongly condemn Turkey’s provocative actions and demand the immediate withdrawal of the Turkish armed forces, including the air force from the conflict zone."