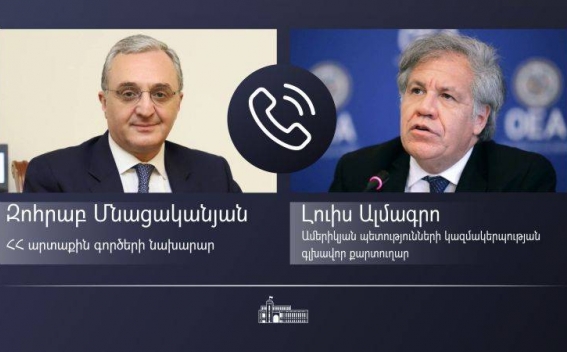 On October 15, Foreign Minister Mnatsakanyan had a phone conversation with Luis Almagro, the Secretary General of the Organization of American States.

The interlocutors discussed the situation in the Nagorno-Karabakh conflict zone. Minister Mnatsakanyan presented the agreements on cessation of hostilities set in the statement adopted at the ministerial level on October 10, as well as Azerbaijan's steps to derogate from them. According to Minister Mnatsakanyan, Azerbaijan, by carrying out large-scale aggression against the people of Artsakh, deliberately targeting the civilian population and vital infrastructure, killing civilians under its control, demonstrates its real goal of resolving the Nagorno-Karabakh conflict by military means and physically annihilating the people of Artsakh.

Minister expressed his gratitude to the Secretary General of the Organization of the American States for the consistent stance of the organization on the Nagorno-Karabakh issue.

Both sides strongly condemned Azerbaijan's actions aimed at infringing the right of the people of Artsakh to self-determination and the right to life by involving extra-regional forces and foreign terrorist fighters.