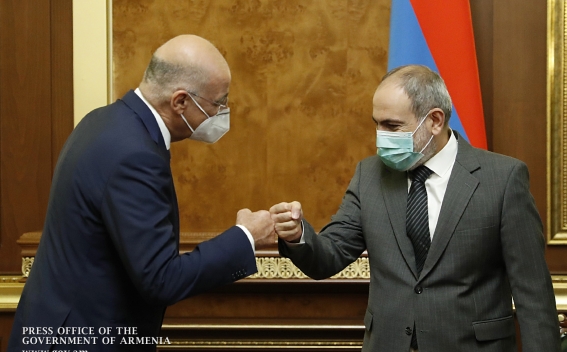 The Prime Minister welcomed the Greek Foreign Minister’s visit to our country, which is a strong support for Armenia, the Armenian people in this crucial moment.

“Our peoples are bound by deep-rooted ties of friendship and shared values. Armenia prioritizes the continuous strengthening and development of relations with Greece, which is especially important in today’s complicated regional and geopolitical situation. I wish to thank Greece, the Greek people for supporting Armenia and the Armenian people,” Nikol Pashinyan said.

With reference to the war unleashed by Azerbaijan against Nagorno-Karabakh, the Premier slammed Turkey’s direct involvement and its steps to destabilize the region.

The Greek Foreign Minister conveyed warm greetings and words of support on behalf of Greek Prime Minister Kyriakos Mitsotakis. Nikos Dendias said that the two nations and countries are bound by centuries-old strong friendship, and Greece and the Greek people will stand by the Armenian people in this difficult situation. He noted that Greece is in favor of an immediate cessation of hostilities in Nagorno-Karabakh, as violence is not the way to resolve the issue.

Nikos Dendias stressed that his country condemns any such foreign intervention as may add fuel to the fire, adding that Greece backs the OSCE Minsk Group Co-Chairs’ call to observe the ceasefire and resume the peace process.

The Armenian Premier and the Greek Foreign Minister talked about Turkey’s destabilizing expansionist policy, which is being manifested in different parts of the globe. Highlighting the inadmissibility of such policies, Nikol Pashinyan and Nikos Dendias exchanged views on the possibility of joint counteraction.