The Right of the People of Nagorno-Karabakh to Self-Determination Is of Strategic Importance to Us: Nikol Pashinyan told TASS News Agency 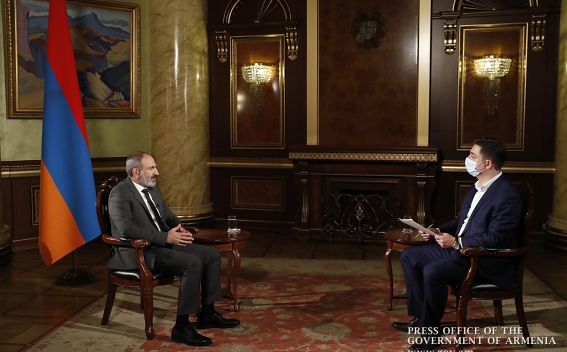 Prime Minister Nikol Pashinyan gave an interview to Russian TASS news agency. Below is the English transcript of the interview.

TASS - Mr. Prime Minister, you recently gave several interviews to media outlets from different countries. Nevertheless, the regional situation is changing rapidly, so we would like to dwell on the most fundamental, as it seems to us, basic points that are not so subject to change and can help our readers better understand your country’s approaches to a speedy settlement of the Nagorno-Karabakh conflict.

Do you see any chance for going back to the ceasefire agreed upon in Moscow, or has it already failed irreversibly?

Prime Minister Nikol Pashinyan - You said international media, I would like to stress that at the moment international public opinion is changing, people are changing, they are becoming more informed about what is going on in our region not only owing our government’s awareness raising campaign, but also due to the Armenian Diaspora’s proactive efforts.

Here, I would like to note that while this is not being done at the highest political level at all, nevertheless there are already some shifts in the process of international recognition of the independence of Nagorno-Karabakh. Quite a lot of U.S. states and several European cities have already adopted relevant documents, resolutions, decisions. Several European parliaments have passed resolutions condemning Azerbaijan’s aggression.

Now, in fact, the international community has no doubts that Turkey is fully involved in the hostilities and that Turkey was the main instigator behind this war. Turkey recruited and transported terrorists and mercenaries from Syria to the conflict zone.

Unfortunately, we see that some of these mercenaries are being transferred to the North Caucasus. We can see some of these terrorist groups operating on the territory of Russia. I am convinced that this is not just accidental: the developments underway in Nagorno-Karabakh and around it have already gone far beyond the framework of the Nagorno-Karabakh problem. This is already a situation that affects the national security issues of many other countries in the region and even outside the region.

I am confident that so far we have not been able to implement the Moscow Statement, because there are forces that are creating specific hindrances. I first of all mean Turkey. Turkey is interested in the failure of the Moscow statement for two reasons. Turkey’s actions are aimed at ousting Russia from the South Caucasus. Let us not forget that the statement was adopted on the initiative of the President of Russia.

Some forces, and specifically Turkey, are interested in the failure of Russia’s initiative. And they hope so to undermine the authority of the Russian Federation in the South Caucasus.

I think that we all understand what is happening and we need to work hard to bring stability back to our region. Of course we will work very closely with Russia on this issue. And we hope that the other OSCE Minsk Group co-chairs will back those efforts.

TASS - Russia is proceeding from the need to immediately organize a meeting between the respective military authorities, so that a ceasefire monitoring mechanism could be agreed upon. Is your country prepared for such a meeting? I mean the meeting’s format and the constituent parties?

Prime Minister Nikol Pashinyan - To be honest, such an initiative has already taken place, and consultations were scheduled in Moscow with the alleged participation of military representatives from Russia, Armenia and Azerbaijan. Our representatives went to Moscow, they did their job, but as far as I can understand, Azerbaijan’s representatives have not yet joined the consultations, which may mean that they simply refuse to do so.

TASS - Are you ready to start the settlement by gradually handing over to Azerbaijan seven regions around Nagorno-Karabakh while keeping the Lachin corridor until Karabakh’s final status is determined?

You just mentioned one of the options available, and Armenia was ready to accept something similar to that several years ago. There is just one nuance here: the status of Nagorno-Karabakh.

TASS – Do you mean the Kazan agreement?

Prime Minister Nikol Pashinyan – I mean the Kazan initiative, as well. I do not consider that very reasonable or pragmatic to make a decision focusing on some important issues and neglecting other important points. We need to understand Azerbaijan’s answer to the same or similar question. Are they prepared to acknowledge the right to self-determination for the people of Nagorno-Karabakh?

TASS - Will your country agree to deploy Russian military observers to ensure a truce and provide for security guarantees? If not Russian, what other countries could participate in such a mission? Are there any countries you do not want to see as observers?

Prime Minister Nikol Pashinyan - I said that our representatives have already participated and agreed on a plan of joint action to monitor the ceasefire regime. So, we did part of work with our Russian colleagues. And I also noticed that Azerbaijan has not yet joined the consultations.

Who, to what extent and with what activity should participate in this process - this is already a matter of agreements between the co-chairing countries. Armenia has no objections, because the OSCE Minsk Group co-chairs’ format is acceptable to us.

We have an obvious position that Turkey, which has actually become the main instigator of this war, cannot participate in peacekeeping or peace processes in any way, because, Turkey is obviously not interested in peace.

TASS - Russia has expressed deep concerns over reports of the transfer of militants to the conflict zone from the Middle East, in particular from Syria and Libya. How can you comment on this?

Prime Minister Nikol Pashinyan - I was just talking about it. It cannot be a coincidence that following the outbreak of hostilities against Nagorno-Karabakh, after the flare-up, media reports appeared saying that mercenaries were participating in the war against Nagorno-Karabakh. International media, including Arab media outlets, reported that some of the groups had been crushed on the battlefield and somehow parted in different directions. And it seems to be obvious that those militants came from Syria. Russia has officially stated that they are Syrian fighters. It is obvious to me that parts or individuals from those defeated groups are moving to Russia because I think they see Russia as an enemy, just like Nagorno-Karabakh or Armenia. The question is how the whole process will continue: will Russia wait for all these elements to move to Russia and start an anti-terrorist campaign or anti-terrorist actions?

I do not know whether the Russian government or the special services are looking at possibility of launching an anti-terrorist operation right on the spot.

Prime Minister Nikol Pashinyan - Yes. Russia has taken anti-terrorist actions in Syria, which is quite far from Russia, because the actions of Syrian fighters and terrorists posed a direct threat to Russia’s national security.

As Russian experts said, though I do not know how correct that calculation is, they are some 80 kilometers away from the Russian border. That is a different situation; I think Russia has a legitimate right and reason to respond to that situation.

TASS - Over the past 26 years, the world has not yet understood how the final agreement between Azerbaijan and Armenia on the future of Nagorno-Karabakh could look like at least in general terms. How do you see this future? Are you ready to make concessions for the sake of peace?

TASS - The foreign ministers met in Moscow following the statement issued by the leaders of three co-chairing nations. Are you personally ready to come to Moscow to meet with your counterpart through the mediation of the Russian Federation?

Prime Minister Nikol Pashinyan - I have already said that the Nagorno-Karabakh issue should be resolved exclusively through peaceful means. Unfortunately, Azerbaijan did not accept this point of view.

Our position is that the Nagorno-Karabakh conflict should be resolved exclusively by peaceful means. And I am ready to make all necessary efforts to achieve such a result. Including going, meeting, talking. But we must all understand that the solution should be based on a compromise, not on the surrender of one of the parties.

TASS – Mr. Prime Minister, thank you for the interview.