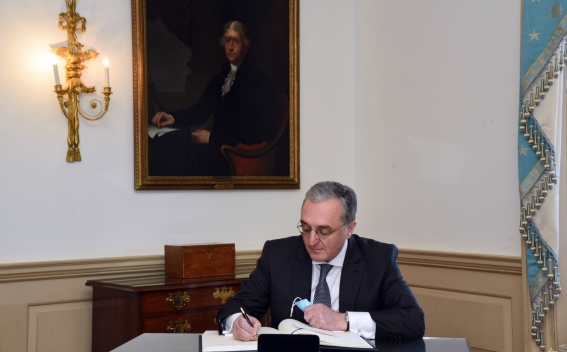 On October 23, in the framework of the working visit to the United States, Foreign Minister of Armenia Zohrab Mnatsaknayan held an online meeting with Nancy Pelosi, the Speaker of the United States House of Representatives. Lilit Makunts, the Head of the Armenia-US Friendship Group of the National Assembly of Armenia also participated in the meeting.

During the conversation, Minister Mnatsakanyan expounded on the large-scale war unleashed by Azerbaijan against Artsakh since September 27, and the following humanitarian situation. Minister Mnatsakanyan stressed that Azerbaijan’s pre-planed aggression is accompanied with numerous war crimes, including the indiscriminate targeting of civilian population and infrastructure, religious and worship sites by using weapons prohibited by international conventions.

All this is an existential threat to the security of the peaceful population of Artsakh, which can be counteracted by the international community through full realization of the right of Artsakh people to self-determination, namely the recognition of the independence of Artsakh.

According to the Minister, the direct involvement of Turkey in military hostilities by Azerbaijan, which is expressed in Turkey’s political and military support to Azerbaijan and the deployment of foreign terrorist fighters in the conflict zone, is a threat to regional security and peace.

The sides underlined the need for immediate implementation of the agreements on cessation of hostilities in Nagorno Karabakh conflict zone and the continuation of the peace process within the framework of the OSCE Minsk Group Co-Chairmanship.

The Foreign Minister of Armenia expressed gratitude to the US House of Representatives for the recognition of the Armenian Genocide, especially emphasizing the personal contribution of Speaker Nancy Pelosi.