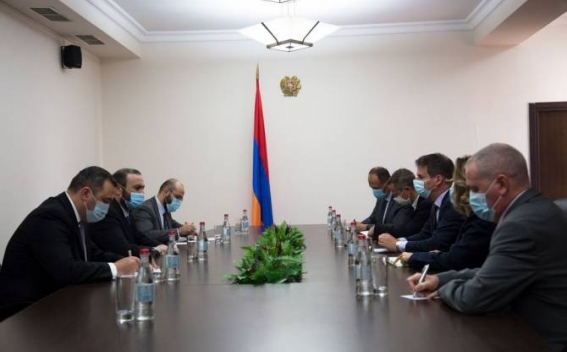 The Secretary of the Security Council Armen Grigoryan received the Ambassador Extraordinary and Plenipotentiary of the Republic of France to Armenia Jonathan Lacôte.
The Secretary called the Ambassador's attention to Azerbaijan's gross violation of the three humanitarian ceasefires reached by the persistent efforts of the OSCE Minsk Group Co-Chair countries. The Secretary highlighted Turkey’s growing negative involvement in regional security and stability, evident in its provision of military-technical assistance to Azerbaijan, the recruitment and transfer of mercenary terrorists to the conflict zone, and its calls for a military solution to the conflict.
Secretary of the Security Council Armen Grigoryan highly praised the deeply rooted Armenian-French friendship, France’s efforts, and the personal involvement of President Macron in the peaceful settlement of the conflict, as well as the French National Assembly’s delegation’s visit to Armenia and Artsakh.
Ambassador Lacôte reaffirmed the need for solely a peaceful and diplomatic settlement of the conflict.
Հայերեն На русском