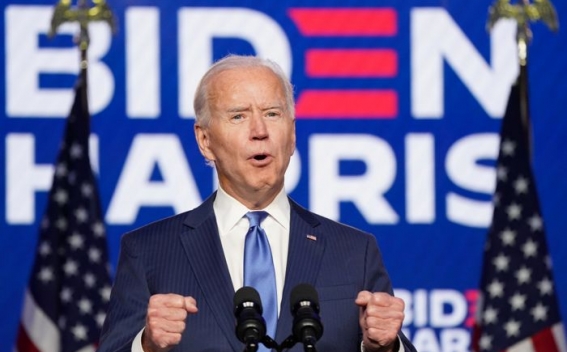 President-elect Joe Biden on Saturday night claimed "a clear victory" and preached unity in Wilmington, Del., after earlier in the day taking a projected victory in a contentious presidential election, Foxnews reports.

"The people of this nation have spoken. They delivered us a clear victory. A convincing victory. A victory for we the people," Biden said. "The most votes ever cast for a presidential ticket in the history of this nation," he said.

"I pledge to be a president who seeks not to divide but unify. Who doesn't see red states and blue states, only sees the United States."

To Trump supporters, he said: "I understand the disappointment tonight. But now let's give each other a chance. It's time to put away the harsh rhetoric, lower the temperature... To make progress we have to stop treating our opponents as our enemies. They are not our enemies, they are Americans."

The president-elect also said he wants the parties to begin "to cooperate with one another," calling polarization between the parties "a choice."

Also part of Biden's mandate, he said, is to address the coronavirus crisis, an issue that defined the presidential campaign and which many say potentially led to his victory.

"Our work begins with getting COVID under control," Biden said, noting his plan to announce a panel of coronavirus advisers for his transition team. He added that Americans will not be able to experience "all the moments that matter most to us until we get it under control."