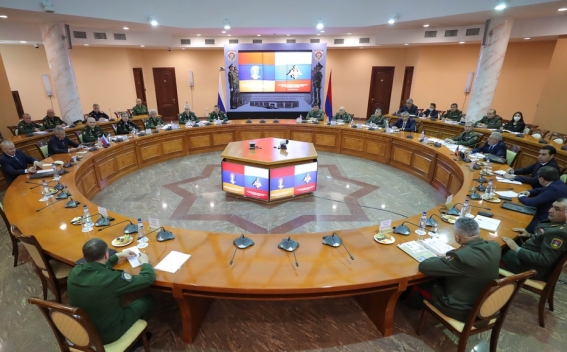 The situation in and around Artsakh (Nagorno-Karabakh), the forthcoming activities, and the Armenian-Russian military cooperation were discussed during the meeting.

Also, the parties lauded Russia's role and efforts aimed at stabilizing the military-political situation in the region, as well as the course and effectiveness of the current Russian peacekeeping mission in Artsakh. Furthermore, the Russian defense minister informed about the work already done in this regard and the future plans.

The Ministers of Defense of Armenia and Russia underscored the work of finding and exchanging the bodies of the dead servicemen, the POWs, hostages and missing persons, as well as the activities of the Russian interdepartmental humanitarian center that has been set in the territory of Nagorno-Karabakh.

And at the end of the meeting, Armenian and Russian defense ministers Vagharshak Harutyunyan and Sergey Shoygu signed a package of documents regulating the scope of the operations by the Russian peacekeeping contingent at the Nagorno-Karabakh conflict zone.