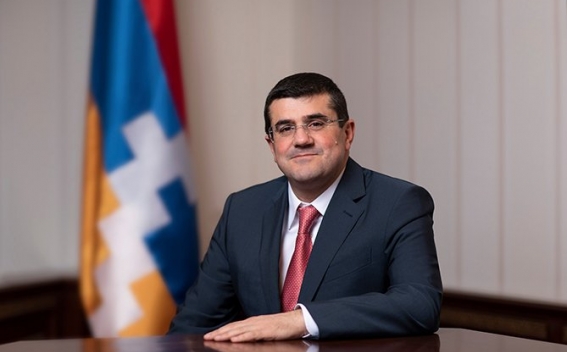 The President of the Artsakh Republic Arayik Harutyunyan writes on his Facebook page:

"Thanks to the efforts and actions undertaken by the top leadership of the Russian Federation, it was possible to stop the bloodshed in the Azerbaijani-Karabakh conflict zone. We express our appreciation to the Russian Federation and extend special gratitude to President Vladimir Putin for mediating efforts to stabilize the situation and for assistance in ceasing the fire and ending the war, restoring peace and stability in our region.

Pursuant to the decree of the President of the Russian Federation, Russian peacekeeping forces were deployed in the territory of our republic. At the moment, the peacekeeping contingent has concluded its deployment and set about fulfilling the tasks, becoming an important factor, stabilizing the difficult situation around our republic.
An effective cooperation has already been established with the command staff of the Russian peacekeeping contingent in Nagorno-Karabakh, headed by Lieutenant General Rustam Muradov. The fulfillment of the main tasks of maintaining peace, stability and security of our citizens requires high professionalism and resilience from the personnel of the peacekeeping contingent, sometimes associated with risk to life. I would like to reiterate the gratitude of our people for the work done and the efforts being exerted to stabilize the situation, to create favorable conditions for establishing and maintaining peace, resolving various tasks.
Highly appreciating the contribution and efforts of the Russian Federation towards stabilizing the situation, I would like to extend my special gratitude for the responsiveness to the fate of the people of Artsakh, the humanitarian assistance provided and active participation in the restoration of life and development of the Republic of Artsakh. An Interdepartmental Humanitarian Response Center is being established aimed at resolving humanitarian issues and restoring civilian infrastructure. Upon the order of the Minister of Defense of the Russian Federation, five additional centers have been formed as part of the Interdepartmental Humanitarian Response Center to solve the entire complex of humanitarian tasks in Nagorno-Karabakh. Russian servicemen accompany our citizens who have previously left the conflict zone and ensure the safety of convoys with humanitarian supplies. The first humanitarian convoy of the RF Ministry of Emergency Situations has already arrived in Nagorno-Karabakh.
We express our gratitude to the President of the Russian Federation for personal active efforts to protect objects of historical and cultural heritage, religious sites in the territory of the Republic of Artsakh, which are important both for our people and from the viewpoint of maintaining the identity of various cultures within the world heritage".
Հայերեն На русском