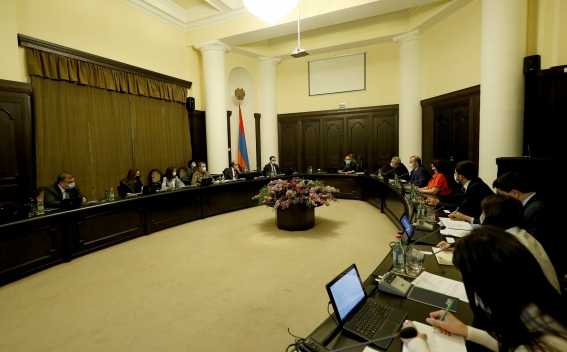 Prime Minister Nikol Pashinyan held a meeting on the return of military personnel and civilians captured during the Artsakh war, identification of missing persons, as well as on providing social guarantees to their families.

The Premier said in his remarks that the 6th item on the roadmap he had published referred to the aforementioned issues: “Of course, we need to make extensive efforts in this direction in the near future. We must definitely inform the families concerned about the work being carried out. Citizens should be spared the trouble of staging actions in front of various government departments to find out what is being done in order to identify or return their relatives. Yesterday I talked to the families of captured servicemen, civilians and missing persons in Echmiadzin. We agreed that we would work hard to summarize the relevant information and determine the steps that we should take in the near future. In particular, there is a political agreement on the exchange of prisoners. We need to clarify how, by what mechanism and in what timeframes this agreement will be implemented, we must understand the mechanisms associated with missing persons.”

Prime Minister Pashinyan said that in the near future he intends to hold meetings with representatives of the families of missing and captured persons. “During this period, we could witness cases when those considered missing were found safe and sound; they did not have the opportunity to report their whereabouts. We hope to see more such cases. And now it is necessary to prepare in order to provide more specific and complete information to their relatives,” Nikol Pashinyan said.

The Prime Minister was briefed on the ongoing activities aimed at getting back the captured servicemen and civilians, identifying the missing persons. Mechanisms for finding missing persons were discussed. The directions of social and psychological support to the affected families were touched upon.

Prime Minister Pashinyan instructed to set up an interdepartmental working group which will develop and submit prompt solutions to the aforementioned problems. The Premier stressed that it is first of all necessary to keep in close touch with the families of captured military personnel and civilians, identify the missing persons. To this end, he suggested establishing a center that would operate around the clock.

“Daily communication with citizens is what matters most now. The government officials must travel around, meet and talk with families, understand their needs in order to provide medical, psychological and social assistance,” Nikol Pashinyan said.