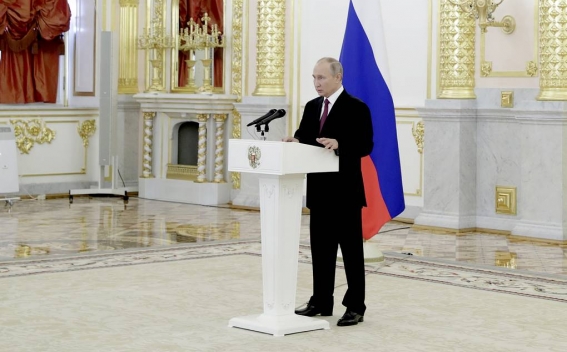 Russia expects international organizations to take part in the process of further settling the conflict in Nagorno-Karabakh, Russian President Vladimir Putin said at a ceremony of receiving credentials from foreign ambassadors in the Kremlin on Tuesday, TASS reports.

The situation in Karabakh "is generally stabilizing and the Russian humanitarian response center is beginning its work to deal with the issues of providing assistance to residents of affected districts, restoring the infrastructure and creating conditions for a normal and peaceful life," Putin said.

"We expect specialized international organizations to take a substantial part in these efforts. We believe that all this creates pre-requisites for the long-term and full-format settlement of the long-standing conflict on a fair basis in the interests of the Azerbaijani and Armenian peoples," the Russian leader stressed.

Russia has taken active efforts to halt the hostilities in Nagorno-Karabakh that entailed the deaths of thousands of Azerbaijani and Armenian citizens, Putin noted.

In doing so, Moscow followed the key accords reached with the OSCE Minsk Group, including its co-chairs: Russia, the United States and France, the Russian president said.

"The main thing that has been achieved is that the bloodshed has been stopped and the truce has been sealed in the trilateral statement by the leaders of Russia, Azerbaijan and Armenia," Putin stressed.

The Russian peacekeeping contingent has been deployed to the region. The peacekeepers are monitoring the ceasefire, providing security for civilians and escorting returning refugees and humanitarian cargoes, he said.