Nikol Pashinyan: The Implementation of the Roadmap Published on November 18 is an Absolute Priority 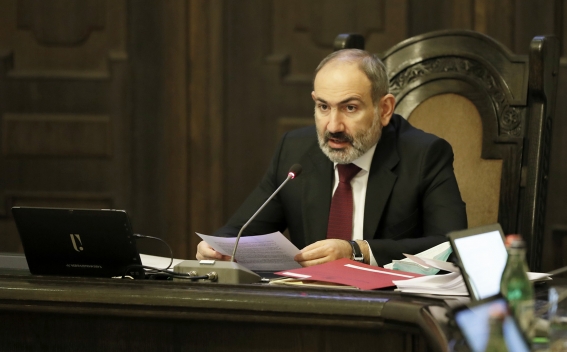 Prime Minister Nikol Pashinyan addressed today’s government meeting with opening remarks, the transcript of which is provided below.

This is the first full-fledged government meeting since the end of hostilities, and I am asking you to first honor the memory of our victims with a minute of silence.

Today we are holding the first meeting of the government in a renewed composition. The ministers of defense, foreign affairs, education, science, culture and sports, labor and social affairs and emergency situations were relieved during this period. The change of the Minister of Economy is expected in the near future. First of all, I would like to thank our colleagues for their efforts and wish the newly appointed ministers every success in their work.

We are facing extremely difficult times. It is aggravated by the fact that many of our compatriots, many of our brothers and sisters are not with us in these difficult times. But our challenge today is as follows: we must go through these difficult times and must overcome this period and its severity. Once again, I want to say that as the Prime Minister of the Republic of Armenia I bear full responsibility for the current situation, but I also realize that I am responsible not only for what has happened so far, but also for further development.

Ensuring external and internal stability and security, implementing the roadmap that I published on November 18 is an absolute priority and necessity, and all our efforts should be aimed at solving this problem. The government has already taken two fairly large-scale events in support of our compatriots in Artsakh. The adoption of support measures will continue as long as necessary.

In the near future, we will focus on rebuilding the war-affected settlements in Syunik and Gegharkunik marzes of Armenia, implementing programs similar to what we have implemented in Tavush marz. Finding the missing persons and exchanging prisoners is an absolute priority. We will keep working on these issues on a daily basis. The main problem is that unfortunately the effectiveness of this work depends not only on us. Another priority task is to provide social assistance guarantees for the families of perished servicemen, disabled and other groups and citizens affected by the war.

However, even in these difficult times, guarantees should be created for the furtherance of reforms in Armenia, while the content and agenda of reforms should be expanded considering the emerging challenges. Along with the solution of the most pressing problems, the causes and reasons behind what happened should be identified, clarified and analyzed, and the Armenian society should get clear-cut answers about what happened and why.

The people must comprehend the truth in order to make the right decisions. Accordingly, our most important task, the most important task of the government is to strengthen our citizens’ confidence that they are the masters of their country by institutionalizing this fact. A citizen of the Republic of Armenia must be sure that he is the real master of the situation, and he must build his future on the basis of this feeling. Also, the people must decide with whom to build this future, and who and what role should play in this future.

The creative potential of the Armenian people and the citizens of Armenia is inexhaustible, and our upcoming major task is to concentrate this potential on building a new future. We should not let their confidence in the future disappear; with our daily work we must strengthen and develop this faith. Thank you.”