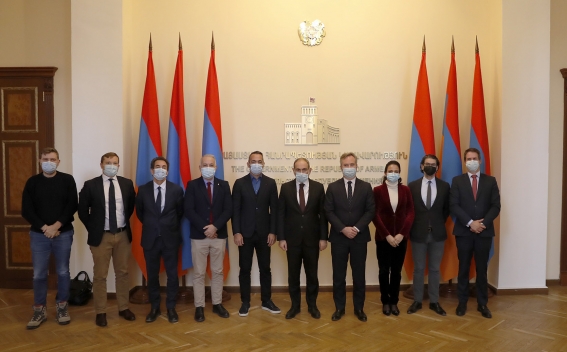 Prime Minister Nikol Pashinyan today received Mr. Jean-Baptiste Lemoyne, Secretary of State of the Ministry for Europe and Foreign Affairs of the French Republic who is leading a delegation for the flight with humanitarian assistance from France to Artsakh-based Armenians.

During the meeting with Secretary of State Lemoyne, the Prime Minister highly appreciated his contacts with French President Emmanuel Macron and thanked them for rendering humanitarian assistance to the Armenians of Artsakh. “We are grateful to friendly France for correctly presenting the situation in Nagorno-Karabakh to the international community and for providing humanitarian aid,” Nikol Pashinyan said.

Mr. Jean-Baptiste Lemoyne, Secretary of State of the Ministry of Europe and Foreign Affairs declared that in tune with the spirit of Armenian-French friendly relations, the French President has reaffirmed his commitment to provide continued humanitarian aid to the Armenians from Artsakh. To this end, France is sending a second humanitarian mission. He noted that France is ready to contribute to the protection of Armenian religious, historical and cultural heritage under the control of Azerbaijan.

Both sides stressed the importance of the assistance provided by international humanitarian organizations. Then, the Prime Minister met with members of the delegation accompanying the humanitarian flight.

Greeting them, Nikol Pashinyan noted: “Dear colleagues, I very much appreciate the mission with which you have arrived. We have always felt the support of friendly France. The activities of the Armenians of France, which they carry out in Armenia, are also of particular importance to us. In this regard, we had no doubt that the Armenian community of France would stand by Armenia and Artsakh. I want to thank you for this mission. We are living in difficult times, I am sure that with the support of our friends, our compatriots, Armenia and Artsakh will overcome this difficult situation.”

Jean-Baptiste Lemoyne thanked the Prime Minister for his kind remarks and introduced the members of the delegation, which is composed of representatives of the State, international and private humanitarian organizations, the French-Armenian community, including Youri Djorkaeff, Goodwill Ambassador for Armenia, as well as the management of the Aznavour Foundation.

In their speech, the members of the delegation emphasized that Armenia and Artsakh can rely on the support of France and the Franco-Armenian community, which testifies to the close Armenian-French friendship, which will be continued. The Prime Minister thanked the French delegation for their words of support and for the work done. Nikol Pashinyan asked them to convey his warm greetings and gratitude to French President Emmanuel Macron.