Armenian Ombudsman: Azerbaijan Artificially Delays the Process of Exchanging PoWs and the Bodies of Killed 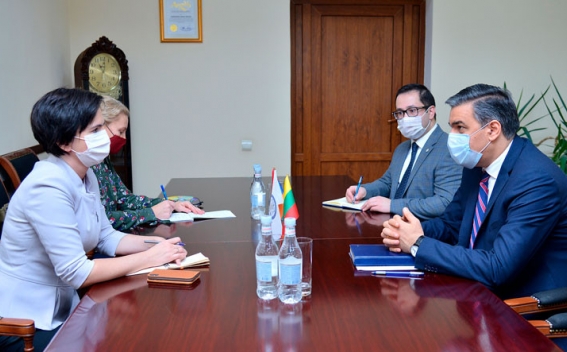 The Human Rights Defender of Armenia Arman Tatoyan believes Azerbaijan is artificially delaying the process of exchanging the Armenian PoWs held in Azerbaijan and the bodies of those killed during the war in Nagorno-Karabakh. The Ombudsman's remarks came at a meeting on Friday with Lithuanian Ambassador to Armenia Inga Stanytė-Toločkienė.

During the meeting, the parties reflected on the gross violations of human rights committed by Azerbaijan during the war, including cases of torture of the military and civilians.

Ombudsman Tatoyan stressed that targeting of the civilian population of Artsakh, the use of banned weapons, the involvement of foreign mercenaries, wide-spread Armenophobia and inhuman treatment speak of the Azerbaijani intentions to carry out ethnic cleansing in Artsakh which continue to this date.

Tatoyan also informed the Ambassador that Azerbaijan artificially delays the process of exchanging PoWs and the bodies of killed both during the war and after the end of military hostilities.

"By doing so, Azerbaijan has an intention to create an atmosphere of uncertainty and tension in the Armenian society, undermine the mental immunity of the society, and cause mental suffering to the families of dead servicemen, missing persons and captives," Tatoyan stressed.