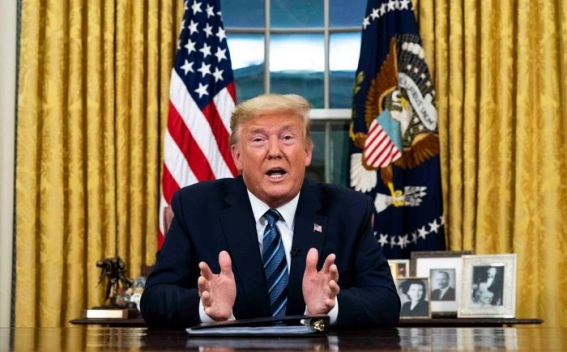 After about an hour of House debate during which Democrats accused him of "incitement of insurrection," the White House put out a "Statement from the President," saying "there must be NO violence."

"In light of reports of more demonstrations, I urge that there must be NO violence, NO lawbreaking and NO vandalism of any kind. That is not what I stand for, and it is not what America stands for. I call on ALL Americans to help ease tensions and calm tempers. Thank You," the statement said.

A short time after the House voted to impeach Trump, a video released on YouTube and the White House Twitter account showed him sitting at the Resolute Desk in the Oval Office and he condemned the violent attack on the Capitol last week and called for an end to further violence.

"I want to be very clear -- I unequivocally condemned the violence that we saw last week, violence and vandalism have absolutely no place in our country and no place in our movement," he said. "Making America great again has always been about defending the rule of law, supporting the men and women of law enforcement and upholding our nation's most sacred traditions and values," he said. "Mob violence goes against everything I believe in, and everything our movement stands for. No true supporter of mine could ever endorse political violence, no true supporter of mine could ever disrespect, law enforcement, or our great American flag, no true supporter of mine could ever threaten or harass their fellow Americans. If you do any of these things you are not supporting our movement, you're attacking it, and you are attacking our country. We cannot tolerate it."

Trump did not acknowledge the impeachment. With just one week left in office, the While House did not say earlier Wednesday if the president would be watching the impeachment debate and vote as he did in 2020.

Isolated and under a social media lockout with his Twitter account permanently suspended, Trump has few options to distract or defend himself against the ongoing impeachment.

"I also want to say a few words about the unprecedented assault on free speech, we have seen in recent days. These are tense and difficult times, the efforts to censor cancel and blacklist our fellow citizens are wrong and they are dangerous. What is needed now is for us to listen to one another, not to silence one another. All of us can choose by our actions to rise above the rancor and find common ground and shared purpose. We must focus on advancing the interests of the whole nation," he said in the video. "Today I am calling on all Americans to overcome the passions of the moment, and join together as one American people."

When, on Tuesday, he broke his public silence since the Capitol attack, speaking to reporters on the White House South Lawn, he framed himself as a victim and lashed out at the Democrats' impeachment effort.

"On the impeachment, it's really a continuation of the greatest witch hunt in the history of politics," Trump said. "It's ridiculous. It's absolutely ridiculous. This impeachment is causing tremendous anger, and you're doing it, and it's really a terrible thing that they're doing."

The walls appeared to be slowly, but surely, closing in around the president as his former allies are turning against him following his response to the insurrection at the Capitol.

Sen. Mitch McConnell, once one of the president's staunchest defenders, has signaled that he is ready to purge Trump from the Republican Party. ABC News has confirmed that McConnell is furious with the president and supports Democratic efforts, believing that Trump committed impeachable offenses.

The Senate majority leader sent a note to his Republican colleagues Wednesday afternoon stating that he had not made a final decision on how he would vote in an impeachment trial.

"I intend to listen to the legal arguments when they are presented to the Senate," he said in the note.

While Trump has expressed no public regret and declined to take responsibility for his role in the riots last week, ABC News learned that House Minority Leader Rep. Kevin McCarthy told fellow members that the president admitted to him that he might be "a little bit" responsible for the events that transpired.

In his remarks on the House floor ahead of the final vote, McCarthy spoke out against the impeachment, but called on Trump to "accept his share of the responsibility."

"I believe impeaching the president in such a short timeframe would be a mistake," he said. "That doesn’t mean the president is free from fault. The president bears responsibility for Wednesday’s attack on Congress by mob rioters."

In his first formal public appearance since the assault, Trump on Tuesday visited the border wall he's touted in Texas and stood by his widely condemned speech Wednesday leading up to the riots and showed no remorse for a mob putting the lives of members of Congress and Vice President Mike Pence in danger.

"People thought that what I said was totally appropriate," Trump said Tuesday.

He minimized what he said before the Capitol riot, claiming that what was said about the summer protests following the death of George Floyd, focused on racial injustice, were worse.

"If you look at what other people have said, politicians at a high level about the riots during the summer, the horrible riots in Portland and Seattle and various other places, that was a real problem," Trump said.